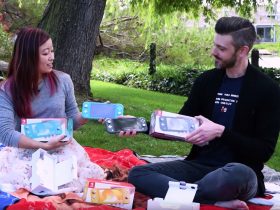 While Rapp’s discussion around the topic had referred to “a whirlwind of controversy and Gamergate harassment,” the company has explained that she had violated an internal policy in relation to “holding a second job in conflict with Nintendo’s corporate culture.”

She had shared admiration for her “truly incredible coworkers,” but suggested that Gamergate had repeatedly contacted Nintendo about “all kinds of things about my personal life.”

Nintendo has been clear in their response that they “firmly reject the harassment of individuals based on gender, race or personal beliefs,” implying that the events over the past few months hadn’t factored into their decision.

“Alison Rapp was terminated due to violation of an internal company policy involving holding a second job in conflict with Nintendo’s corporate culture,” a Nintendo of America representative shared in a statement made to IGN. “Though Ms. Rapp’s termination follows her being the subject of criticism from certain groups via social media several weeks ago, the two are absolutely not related.

“Nintendo is a company committed to fostering inclusion and diversity in both our company and the broader video game industry and we firmly reject the harassment of individuals based on gender, race or personal beliefs. We wish Ms. Rapp well in her future endeavors.”