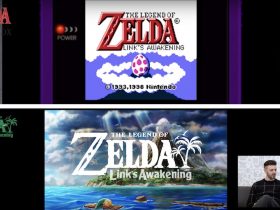 Nintendo Minute comes live to you from PAX East in this week’s episode, with Nintendo of America’s Kit Ellis and Krysta Yang playing the new Battle Modes in Mario Kart 8 Deluxe with those in the audience.

Kit and Krysta firstly share the screenshots that they have captured while playing The Legend of Zelda: Breath of the Wild, asking attendees which are their favourites.

Then, they move on to play the Battle Modes in Mario Kart 8 Deluxe. First up is Renegade Roundup, a brand new cops and robbers-style mode where players are split into two teams. Then we move on to the explosive Bob-omb Blast mode, the collectathon Coin Runners mode that makes a return from Mario Kart Wii, and Shine Thief, where players will battle to keep a Shine Sprite in their possession.