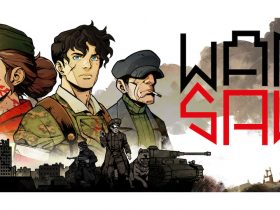 Rise Up Against Nazi Oppression In WARSAW On Nintendo Switch

This week’s Nintendo eShop releases for North America are in, delivering new content on Nintendo Switch, Wii U, and Nintendo 3DS – as well as plentiful discounts.

Blue’s Journey is a side-scrolling action game released by SNK in 1991. In order to save the planet Raguy from the invasion of the Daruma tribe, the hero Blue must fight using leaves, boomerangs, and a variety of other weapons along with his special ability to change his body size. The branching stages allow you to enjoy the game again and again.

The next entry in the side-scrolling action game series Double Dragon is finally here. The story picks up after the elimination of the Black Warriors in Double Dragon II. Experience all-new exhilarating action with the original old-school graphics. Use the art of Sou-Setsu-Ken to rescue the kidnapped Marian. Plus, new enemy characters including ninjas, karate masters, and sumo wrestlers, none of which have been seen in Double Dragon before!

In a land filled with Penguin Vikings, Wurst Zombies, and Hipster Ice Giants, survival is an art. Fortunately, an ancient champion with an elegant weapon has been summoned to please the Gods and restore balance to the universe. Grab your lightspear, become a Germonaut, and traverse lands straight out of Germanic myths. Survive with style and expand your powers to fight for the glory and amusement of the almighty Gods.

NeuroVoider is a twin-stick shooter RPG set in a cyber futuristic world about brains shooting around evil robots with nuclear rocket launchers. Battle through the horde of vigilant robots, boost your character with the smoking remains of your victims, and defeat the master NeuroVoider to end this eternal war. Play it coop with up to 4 friends, or go alone in an adventure of hack’n’slash rampage, with a pinch of rogue-lite, and some permadeath.

Physical Contact: 2048 is a casual but head-minded game that aims at higher values by coalescing the same blocks in the region. For better grades, polite operation is necessary. It is a game series where two people can play against each other. Any two partners, including parents, friends and lovers are suitable. Because it is simple and has rules that everyone knows, you can enjoy the game immediately.

Rayman, Globox and the Teensies are off wandering through an enchanted forest when they discover a mysterious tent filled with a series of captivating paintings. As they look more closely, they notice each painting seems to tell the story of a mythical world. In this platforming classic, the gang must run, jump and fight their way through each world to save the day.

The Bridge is a logic puzzle game that forces you to reevaluate your preconceptions of physics and perspective. It is Isaac Newton meets M. C. Escher. Manipulate gravity to redefine the ceiling as the floor while venturing through impossible architectures. Explore increasingly difficult worlds, each uniquely detailed and designed to leave you with a pronounced sense of intellectual accomplishment. The Bridge exemplifies games as an art form, with beautifully hand-drawn art in the style of a black-and-white lithograph.

It’s up to the kung-fu master Wang to defeat the Dark Emperor, who stands at the top of the kung-fu world in China. Punch, kick, and jump kick your way through all the enemies in the path between you and the three bosses of each stage. Skillfully fight your way through all 4 stages. Be sure not to miss recovery items while dodging enemy attacks! One-on-one fights against the game’s realistic bosses will get you so excited that you’ll feel like you’re in the middle of a kung-fu movie!

Here come Twinbee and Winbee on a mission to save the planet from evil alien invaders! Standing in their way are six stages full of goofy enemies! Play as Twinbee in one-player mode, or team up with Winbee in two-player-cooperative mode. With powerful attacks like Big Shot, or Twin Attack and Burst Attack in two-player mode, there’s plenty of sting in their arsenal! Use your Shot to transform Bells that appear in stages into items with various effects. Stock up on these bad boys to expand your attack range and really have a blast!

Suddenly summoned to a mysterious world, what will the hero protect and lose? As always, the protagonist is training hard with his teacher Eppol, in order to become a respectable hero. After a training session, a mysterious light appears in front of them, engulfing the two. Summoned to another world, the two are bewildered by the situation and begin a journey to find a way to get back to their home world.

When a monster strikes, the fearful hide. But the brave? They ride. Venture into monster nests to collect eggs and hatch a wide array of species with uniquely powerful skills. Form teams, battle alongside them, crush opponents with combo attacks and ride into the sunset a champion. Need more muscle? Then mix and match genes to create monsters with more abilities.