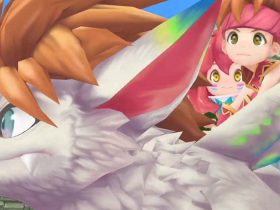 Secret Of Mana HD Being Considered For Nintendo Switch Release

ACA NEOGEO The King of Fighters ’99, Hamster Corporation – $7.99
Take part in the Nests chapter of KOF! Uncover the mysteries of the tournament together with a new hero! The King of Fighters ’99 is a fighting game released by SNK in 1999. This entry in this series marks the beginning of the Nests chapter of the KOF story, and focuses on the new character K’ instead of Kyo Kusanagi. This entry introduces a new Striker Match mode, adding an even more strategic element to the classic KOF game system.

Astro Duel Deluxe, Panic Button – $14.99 (Available Tuesday 30th May)
Battle your friends in space! (Then run over their pilots!) Astro Duel Deluxe includes new features and gameplay created for the Nintendo Switch! It’s is a fun, frenetic same-screen local multiplayer party game for 1 to 6 players! Game rounds are quick and defeat is sudden as you blast enemy ships, or run over your friends’ shipless pilots. (Hilarity ahead!)

Disgaea 5 Complete, NIS America – $59.99
In the Disgaea 5 Complete game, lead Killia and his tenacious army of rebels on their dark and dangerous path to vengeance. This strategy RPG offers hundreds of hours of over-the-top, award-winning gameplay, and marks the first time the core game is available on the go. The game includes all eight bonus scenarios, four fan-favorite characters and three character classes that were originally only available as DLC. For people who want to try before they buy, a free demo for the game is also available in Nintendo eShop on Nintendo Switch.

Block Zombies!, Nostatic Software – $4.99
In a world gone wrong, one girl stands alone. Alone, but not unarmed! Strange crystalline structures have turned people into mindless, zombie-like creatures. Fight the Zombies! Stop the Infection! Save the Day!

The Girl and the Robot, Flying Carpets Games – $9.99
The Girl and the Robot is a unique third-person action/adventure game set in a fairytale world. You take on the role of a young girl trying to escape from a castle ruled by an evil queen. On her way, she meets a mysterious robot that can be controlled remotely and together they encounter many challenges that test the strength of their newfound friendship. This game is the first act of the fairy tale.

DLC Pack #3 – Lost Altars Pack ($14.99, 10 pieces of content): The mysterious dungeons included in this pack hold the power to upgrade characters to exclusive classes that don’t appear in the main game.

Drone Fight, CIRCLE Entertainment – $3.99
Drone Fight is a racing game where you operate unmanned aircraft (drones) as they soar through the lands and skies! Choose from one of four different drones as you aim to fly through treacherous courses faster than anyone has done so before! There are two different kinds of game modes. Either face off against the CPU and aim to come in first place, or take on Time Attack mode and aim to shave every second you can off your best time!