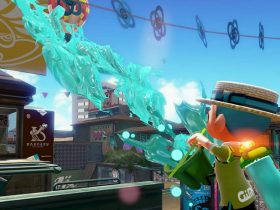 Splatoon Gears Up With Tri-Slosher Nouveau

ACA NEOGEO Last Resort, Hamster Corporation – $7.99
Power up! Go forth, units! Take down the incoming enemies! Last Resort is a shoot ‘em up game released by SNK in 1992. Players can use weapons such as laser, homing, or grenades which can be powered up as many as three times, along with a “unit” that can nullify enemy bullets and attack foes. Using these abilities and many other attacks players will fight in order to win the war between robots and humanity.

Coqui The Game, Team One – $5.99
Coqui The Game is an action-adventure platform video game with 47+ levels of fun, including an overworld map, bonus levels, sky levels, underwater levels, save features and daring bosses.

Sphere Slice, RCMADIAX – $1.49
Unleash your inner Ninja Warrior in Sphere Slice. Drag your finger across the touch screen to destroy the color spheres in two exciting game modes. Watch out for hazards and achieve a high score to share with your family and friends.

Swap Blocks, WizByte Games – $4.99
In Swap Blocks you will match 3 or more similar blocks on a game board by moving blocks. Play solo game modes, or play against a CPU or another player. There are also various challenge puzzles to test you.

Fire Emblem Echoes: Shadows of Valentia Rise of the Deliverance Pack, Nintendo – $12.99 (four pieces of content)
Discover the previously untold history of Valentia in this Prologue pack. Complete with new story content and additional voice acting that details the rise of the Deliverance in Zofia, this collection of challenging maps includes new support conversations between selected heroes, as well as the ability to take command of a character players won’t be able to control in the main game.

Of Mice And Sand, CIRCLE Entertainment – $7.99
In Of Mice And Sand, the mice drive a Desert Ship as their mobile fortress to travel around the planet. By ordering the mice crew living in the Desert ship, you can build facilities on the ship and make food for breeding the mice with various items. With the development of the ship, more mice will join in and they can accomplish more jobs. Don’t let them starve and make them rich.