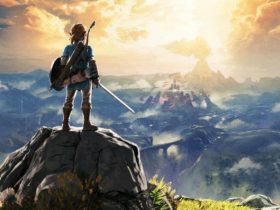 Free Boomerang Hurtles Into The Legend Of Zelda: Breath Of The Wild

This week’s Nintendo eShop releases for Europe are in, delivering new games for Nintendo Switch – as well as plenty of discounts across all platforms.

Skybolt Zack, GMG Label
Skybolt Zack is the result of a unique way of mixing platformer mechanics and colour matching gameplay. Controls are tight and Zack’s ability to rocket punch, dash, focus, change direction when destroying an enemy and more, offers more depth than what meets the eye – following the “easy to learn, hard to master” mantra.

140, Carlsen Games
140 is an IGF award-winning rhythm platformer with a minimalistic style and abstract, colourful graphics. Use the rhythm to overcome challenging obstacles controlled by an energetic electronic soundtrack.

Aborigenus, Drageus Games
Invaders enslaved your peaceful tribe. The best fighters were sent to save your beloved and relatives but nobody ever returned. It’s now your turn to save the flying islands from the enemy. Choose who you are – a shaman, a warrior or a hunter. You are the last hope of your fellow tribesmen.

AO Tennis 2, Bigben Interactive
Set out to conquer the world rankings in a singles career or in doubles with a friend. Manage your Reputation, sponsors and performance to reach the top.

Arcade Archives Exerion, Hamster Corporation
Exerion is a shooting game released by JALECO in 1983. Players must grapple with the inertial force of their fighter within a pseudo-3D space all while properly using dual and single beam weapons to destroy incoming enemies.

Blackmoor 2, Four Fats
Experience a platformer with genre-defining beat-em-up combat based on classics from the 90s. Journey through the world via story mode or traverse player-made dungeons with up to 4 players co-operative play! Or if you wish, challenge your friends to an old school style street fight in the VS mode!

Cooking Tycoons: 3 in 1 Bundle, Baltoro Games
Cook tons of delicious meals from all over the world and become the best chef in the city! Cook hundreds of tasty dishes with all the possible kitchen appliances and countless ingredients. Try it all: coffee makers, juice machines, pizza ovens, frying pans, fryers and ice cream machines.

Extreme Trucks Simulator, SC Ovilex Soft
Do you like heavy trucks? Try the latest simulator where you can feel what it’s like to take control of Extreme Vehicles such as Construction Excavators, Dumper Trucks, Bulldozers, Haulers, Cranes, Garbage Trucks and many more!

Invisible Fist, Pineapple Works
Create a billion-dollar startup, try to pay off your student loans or wait in the line for Food Stamps… And fight the Invisible Fist of the Free Market in this Late Capitalism Card Game!

Mary Skelter 2, Idea Factory
The Nightmare continues in Mary Skelter 2! In this first-person dungeon crawler, play as fairytale-inspired characters called Blood Maidens, each with deeply customizable character-specific classes. Balance between power and madness in turn-based battles with a blood-fueled transformation system, and escape a living prison while indestructible Nightmares give chase in real-time.

Mirror, SakuraGame
This is a game that combines match-3, GALGAME elements and beauties. If you want to learn more about those beauties, you need to best them first. How the story goes is choice-based so your choices will ultimately decide their fate.

Nicky: The Home Alone Golf Ball, QUByte Interactive
Nicky is a fun and challenging strategy game in which you have to carefully calculate your movements to get to the end of the course. Each time you play, you improve your skill which enables you finish the challenge in fewer movements.

Sir Eatsalot, Behind The Stone
You are the righteous and corpulent Sir Eatsalot. Sally forth on an epic quest to track down Hysterica, a mean old sorceress who has poisoned Gluttington Kingdom with sour lemonade, and put an end to her shenanigans in this mouthwatering adventure platformer.

Technosphere, Ultimate Games
Atlas Corporation is mining crystals in the core of an asteroid in the orbit of the Earth. Due to a failure in the asteroid systems, orbit correction was disabled. Only the Technosphere is able to reload the asteroid system and restore the orbit. You have 10 hours to save the earth from disaster!

THOTH, Carlsen Games
From the creator of the award-winning ‘140’ comes THOTH, an intense and challenging arcade shooter. Each stage will put your puzzle-solving and finesse to the test, as the arena changes, surprising you with new mechanics to wrap your mind around.

Anime Studio Story, Kairosoft (available Friday 17th January)
Produce your own hit anime starring a character of your making! Select a face, body, and presto! Your completed hero can then explode onto the scene of your show, wowing watchers to rule the rankings! Categories include “Dateability,” “Popular with Kids,” and more! As the animaestro, only you can bring status to your studio!

Dual Brain Vol.2: Reflex, D-O (available Thursday 23rd January)
A new brain training game has been released! Make full use of Dual Task to compete with players around the world for scores!

Mosaic, Raw Fury (available Thursday 23rd January)
You live a monotonous life in a cold city, with no real sense of meaning – until one crucial day, when strange things start to happen and everything changes.

PuPaiPo Space Deluxe, BolHut (available Thursday 23rd January)
PuPaiPo Space is a colorful space shoot-em-up in which you travel from Stage to Stage in search of the legendary space pizza. Piloting your trusty spaceship, you will have to battle waves of opponents, dodge hundreds of bullets, pick sweet power ups and fight back!

Seek Hearts, KEMCO (available Thursday 16th January)
With questions swirling in his mind about why he was created and by who, Izen sets out on a journey to discover his origins. However, as he and those with him pursue answers to this mystery, they fail to notice a shadow creeping up upon them with the intent to stop them in their tracks…

SELF, indienova (available Thursday 16th January)
SELF is a Kafkaesque suspense text-based adventure game with simulation and puzzle mechanics.