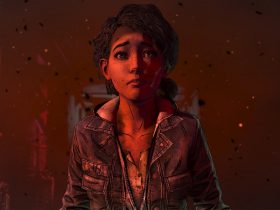 911 Operator Deluxe Edition, SONKA (available Friday 1st May)
In 911 Operator, you take on the role of an emergency dispatcher, who has to rapidly deal with the incoming reports. Your task is not just to pick up the calls, but also to react appropriately to the situation – sometimes giving first aid instructions is enough, at other times a police, fire department or paramedics’ intervention is a necessity.

Arcade Spirits, PQube (available Friday 1st May)
What if the 1983 video game marketing crash never happened? Set in 20XX, Arcade Spirits is a visual novel romantic comedy with a different history, where arcades still reign supreme as the ultimate place to play. After a period of turbulent employment, your character starts an exciting new job at the Funplex: a popular local arcade with a team of staff that are as eccentric as the customers.

Book of Demons, 505 Games
Book of Demons is a hack-and-slash deck-building hybrid in which you decide the length of quests. Wield magic cards and slay the armies of darkness in the Old Cathedral dungeons. Save the terror-stricken Paperverse from the clutches of the Archdemon himself!

Bubble, Sabec
Bubble is an easy and fun to play arcade puzzle game where you have to shot coloured bubbles to complete levels. If three or more bubbles of the same colour are next to each if you shot any one of them they will burst and the bubbles above drop down.

Dread Nautical, Zen Studios
A tactical turn-based RPG with roguelike elements, Dread Nautical combines immersive gameplay with a cartoonish—yet captivatingly eerie—tone. Supernatural forces have overwhelmed a cruise liner called Hope with mysterious malevolent monstrosities. Fight them off as one of four unlikely heroes. Manage your scarce resources effectively, and convince scattered survivors to fight alongside you. You’ll need them for any hope of escaping this “vacation” alive.

Enchanted in the Moonlight: Kiryu, Chikage and Yukinojo, Voltage
You’re an average girl of 25 whose life consists of working at the local library, maintaining your family’s shrine, and little else. However, that all changes when gorgeous men save you from malevolent malevolent forces! These men aren’t all they appear to be, though. In reality, they’re Ayakashi Spirits!

Enchanted in the Moonlight: Miyabi, Kyoga and Samon, Voltage
You’re an average girl of 25 whose life consists of working at the local library, maintaining your family’s shrine, and little else. However, that all changes when gorgeous men save you from malevolent malevolent forces! These men aren’t all they appear to be, though. In reality, they’re Ayakashi Spirits!

Fairy Knights, CFK
The new dynamic puzzle RPG! Hit the road with cute heroes. Here begins the journey of a boy and a girl. Slay the Devil and bring back the rain to the barren Kingdom of Vadelle.

Farmer’s Dynasty, Nacon
More than just an agricultural simulation: in Farmer’s Dynasty, you have to rebuild your farm and develop your heritage, start a family, handle your relationships and, of course, manage your crops to prosper.

Gates of Hell, Super Icon
Gates of Hell is a fast-paced first-person shooter where you must battle through relentless waves of Demonic terror! There is nowhere to hide as you battle through Hell’s raging demon hordes. Keep on the move, find and equip powerful Angelic and Demonic weapons and stay alive as long as you can.

Indivisible, 505 Games
Indivisible is an action RPG / platformer featuring stunning hand drawn art and animation combined with unique real-time combat mechanics. Immerse yourself in a fantastical world with dozens of playable characters, a rich storytelling experience, gameplay that’s easy to learn but difficult to master, and the trademark razor-sharp quality that Lab Zero Games is known for!

Levelhead, Butterscotch Shenanigans
Take control of GR-18, a delivery robot in training, as you run, jump and blast your way across more than 90 challenging, hand-designed campaign levels. Get creative and make your own levels with hundreds of items, including enemies, hazards, paths, programmable switches, secrets, weather, music and powers. Once you’ve completed your level, share it with the rest of the world and gain a following!

Moving Out, Team17
Are you ready for an exciting career in furniture? As a newly certified Furniture Arrangement & Relocation Technician, you’ll take on moving jobs all across the town of Packmore. Smooth Moves may not be the biggest moving company, but there’s no task too dangerous or strange for this busy team of go-getters. Grow your business to brave new heights, recruit colourful customizable characters, and save your town from furniture peril!

Mushroom Heroes, Dolores Entertainment
A puzzle platform adventure, with inspiration going all the way back to 16-bit classics. You have three mushroom heroes who each have special abilities, some of which the player needs in order to pass certain obstacles.

My Secret Pets!, D3Publisher
This is a romance game for women where you live with your pets who have suddenly transformed into attractive men. You’ll spend seven days with your pets, who love you devotedly. Are they your pets or are you becoming the pet?! Your exciting reverse-harem cohabitation with these animal men is about to begin!

Pocket Arcade Story, Kairosoft
Build your very own gaming paradise packed with heaps of game machines and more! If some of your customers become regulars, you can test their mettle in fighting game tournaments. Crush the competition with crazy combos and knock out your opponents with a flurry of fists! If you rise from the fray victorious, more and more customers will pile into your arcade!

SEGA AGES G-LOC Air Battle, SEGA
Experience this retro title with the SEGA AGES spin, in AGES mode, everything is ramped up, get more enemies, more missiles and a more powerful lock-on system! Take a trip back to the past with a moving cabinet display that recreates the arcade experience, including atmospheric arcade sounds, in the comfort of your own home.

SNK Gals’ Fighters, SNK Corporation
SNK’s wonderous heroines duke it out for a shot to be crowned the Queen of the Fighters! This lighthearted story with comical interactions will keep you coming back for more!

StarCrossed, Whitethorn Digital
StarCrossed is an action arcade game with a magical girl aesthetic and a cooperative twist! Join our cast of 5 space-faring heroes as they travel across the stars, working together to strengthen their bond and defeat a looming evil that threatens the Nova galaxy! It’s time to team up, get sparkly, and take out the bad guys!

Swapperoo, Fallen Tree Games (available Friday 1st May)
The rules are simple: tap an arrow to move it in the direction it faces. Make a row of 3 tiles of the same color and the tiles disappear. If that sounds too easy, don’t worry – you’ll find yourself in situations that require clever manipulation of the game board. There’s an assortment of objectives to keep you on your toes: tiles that chase you, tiles that must be matched within a few moves, tiles that must be protected, and lots more.

War-Torn Dreams, Playstige Interactive
War-Torn Dreams is a 2D story-rich, side-scrolling action game, set in the wasteland of USA, plagued with constant war. Following the collapse of the economy, government, and society, you must brave heavily armed militia, lawless gangs, dangerous streets, desolate buildings and underground bunkers on your quest to escape this post-apocalyptic wasteland alive. The road to a new life is paved with danger, hope and constant reminders of everything that’s been lost.