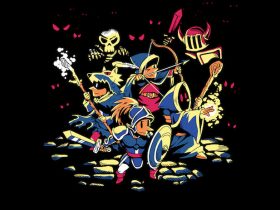 Dandy Dungeon: Legend of Brave Yamada, Onion Games
Yamada-kun (Age 36) is a programmer at a major game publisher. He hates his job. Deep into every night, alone in his apartment, he works on his own game: it’s an RPG, and he is the hero, Brave Yamada!

Fury Unleashed, Awesome Games
Fury Unleashed is a combo-driven roguelite action platformer – each kill you make increases your combo. Hit certain thresholds and your damage resistance and healing powers will kick in!

Cat Girl Without Salad: Amuse-Bouche, WayForward
Blast everything that moves in this genre-defying action extravaganza! Take control of Kebako, a cat-eared intergalactic bounty hunter, as she patrols the galaxies with her faithful companion Squiddie in search of ridiculous space criminals.

Chapeau, Salt Castle Studio
The spirit of local co-op is alive, and it’s haunting hilarious headwear! Go Head to Head with your friends in frantic Versus modes or try working together in Cap-tivating co-op. You can even fly solo in Challenge mode to unlock new hats and maps!

Curious Expedition, Thunderful
Curious Expedition is a roguelike expedition simulation set in the late 19th century. Take the role of famous historical personalities and venture forth on expeditions to unexplored regions on a quest for fame, science and, of course, fortune!

Drift Zone Arcade, Awesome Industries (available Friday 3rd April)
Welcome to the world of drifting! The smell of burned rubber, the roar of 500 bhp engines and the style you have never seen before! Take part in two types of competition and win high cash prizes and reputation points needed to climb up the career ladder. Buy new cars, upgrade them and drive the wheels off them in diverse tracks.

In Other Waters, Fellow Traveller (available Friday 3rd April)
Play as an Artificial Intelligence guiding a stranded xenobiologist through a beautiful and mysterious alien ocean. A non-violent sci-fi story, enter a world of wonder, fear and vulnerability, unraveling the history and ecology of an impossible planet. What will you discover together?

Junk Jack, Pixbits
Make the world truly yours in Junk Jack! A relaxing 2D sandbox where you can explore, build and survive in randomly generated procedural worlds, full of monsters and hidden treasures!

Lost Artifacts, 8Floor Games
Set off with Claire on an adventure through the uncharted continent of the casual strategy game Lost Artifact . Get ready for 40 vivid levels, lots of different objectives, increasing difficulty, a fun plot, and a unique world and captivating gameplay for any age. Build a city and manage resources, restore ancient statues, use powerful magic and draw power from holy places. With its simple controls and easy training, you’ll be playing like a pro in no time.

Nirvana Pilot Yume, RedDeerGames
Nirvana Pilot Yume is the cure for your ‘80s sci-fi anime nostalgia. Turn on the neon lights and raise the volume of the synthwave soundtrack: welcome to 3080.

Operencia: The Stolen Sun, Zen Studios
Operencia: The Stolen Sun embraces everything you love about classic first-person dungeon-crawlers, enhancing the old-school turn-based RPG experience with modern sensibilities. Gather your team of memorable characters and guide them through a world inspired by Central European mythology, where history meets legend.

Pocket Harvest, Kairosoft
Cultivate crops with love, ranging from crisp lettuce to succulent strawberries, and refine them into prizewinning produce to bring orders from the local grocers flooding in. Adorable animal friends will lend a helping hoof too, providing milk, wool, eggs, and more!

Random Heroes: Gold Edition, Ratalaika Games (available Friday 3rd April)
The Earth is being invaded by terrifying aliens! It’s up to you and a bunch of random heroes to save the day and stop the invasion! Shoot and jump your way through over 108 levels to stop the alien menace and bring peace to the planet. Will you be able to survive?

Rascal Fight, Coconut Island Games
Rascal Fight is a casual battle arena brawler with a magical twist. You’ll play as a rascal running wild in an environment filled with contraptions where you battle it out against your opponents.

Snakeybus, Digerati
Snakeybus is an absurd arcade-driving game and frantic score-chasing experience where the biggest danger is yourself! Wind through city streets, pick up as many passengers as you can and deliver them to their destination to increase your score AND the length of your bus!

Stones of the Revenant, ChickenCat Games
Stones of the Revenant is inspired by retro arcade beat-em-ups mixed with elements from your favorite classic action-platformers. Choose from six playable heroes; Radcliffe the Knight, Halvar the Barbarian, Brielle the Sorceress, Galina the Ranger, Isaak the Thief, and Fritz the Tinkerer. Each with their own unique playstyle! Pair up with a friend via local co-op or fight your way solo through the Revenant’s followers and their undead minions.

The Complex, Wales Interactive
After a major bio-weapon attack on London, two scientists find themselves in a locked-down laboratory with time, and air, running out. With choose-your-own-adventure style gameplay, your actions and your relationship with other characters will lead you to one of eight suspenseful endings.

WordHerd, Nellyvision
Take a break with Mia and zone out of the daily grind with chilled gameplay and absorbing wordplay. Help Mia call the lost animals home before nightfall. Learn some modern, obscure and comic meanings as you try to beat your longest, rarest and highest scoring words through the ninety levels of word detective animal rescue.

Wurroom, Sometimes You
Wurroom is an interactive art experience born in the minds of two holographic entities: Michael Rfdshir and Serge Bulat. It is designed to reveal things about ourselves and measure our imagination. You are just a Hand, lost in the undefined hyper wonderland, where visions, thoughts, and ideas from your subconscious, intermix with the fragments of “other”, inexperienced worlds.

Zombie Army Trilogy, Rebellion
Zombie Army Trilogy is a pulse-pounding third-person shooter with three epic campaigns, a heart-pumping horde mode, and intense horror action. In the dying flames of World War II, a legion of undead super soldiers threaten to overwhelm the whole of Europe. Fight alone or team up to save humanity from the zombie menace!