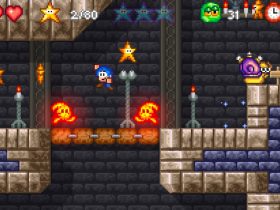 Nintendo of America have detailed the latest additions to their WiiWare, Nintendo DSiWare, Nintendo eShop services, bringing a wealth of new content available to download. The latest content is as follows:

* Aya and the Cubes of Light, Object Vision Software – 1000 Wii Points
What’s gotten into Cseom!? Instead of keeping the Cubes running, he’s taking the Energy Packs out of the terminals! The Cubes are the power sources of the stars, and if they stop working it gets dark! Play Aya, the daughter of the Cube Corporation. Teleport onto the Cubes to collect the Energy Packs to get the Cube engines working again. But it’s not that easy to find your way around; you’ll have to think around outside the box and mustn’t get disorientated, even when you’re upside down!

Nintendo eShop – 3D Classics
* 3D Classics TwinBee, Nintendo – $ 4.99
3D Classics TwinBee is a remastered 3D version of the arcade classic; you pilot the TwinBee fighter craft and defend Donburi Island. Take aim at flying foes and drop bombs on enemies below. A clever power-up system grants different bonuses by shooting Bells to change their colour. So tune-up your TwinBee and shoot for a high score

Nintendo DSiWare
* Break Tactics, Agetec – $4.99 (Nintendo 3DS) 500 Nintendo DSi Points (Nintendo DSi)
Break Tactics is a full-scale tactics game. Recruit and deploy units, strategies and engage in epic battles leading your men to victory. As Commander you can increase levels, attacks and movements. Your units can increase hit points, offense and defense strength. Determine battle objectives and deploy the best units for each battle. Take full advantage of the terrain and use items to gain an advantage. Earn Break points to upgrade and level up your units. Command your army to victory and end this war once and for all.

* Escape Trick – Ninja Castle, Intense Co. – $4.99 (Nintendo 3DS) 500 Nintendo DSi Points (Nintendo DSi)
Play with the main character of Ninja and escape from the castle, which is full of puzzles. Inspect and touch an area when it looks suspicious. The game provides an enjoyable game play experience for everyone by solving puzzles and using items. The game is full of action elements such as using Ninjutsu by drawing a circle, taking a picture and sticking it on the Memo screen, and by using the camera feature to enjoy the “escape game”.