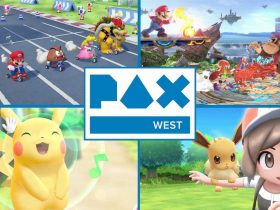 Nintendo of Europe have detailed the latest additions to their WiiWare, Nintendo DSiWare, Nintendo eShop services, bringing a wealth of new content available to download. The latest content is as follows:

WiiWare
* Kyotokei, Microforum – 500 Wii Points
The powerful witch Rika has invaded the peaceful realm of Estaria with an army of monsters! The magic brothers Kyo and Kei are the only ones who can stop her! Use your powerful aura of protection to absorb the enemy spells and unleash their power all at once! Travel through the dark swamps, cold mountains, dangerous caves full of lava and much more! The powerful protection aura that surrounds you will be of great help, absorbing all the shots of the same colour as the aura. Face Rika and free Estaria from her menace!

Virtual Console (Nintendo 3DS)
* Mega Man: Dr Wily’s Revenge, Capcom – €4
Mega Man: Dr. Wily’s Revenge features elements of the Nintendo Entertainment System titles MEGA MAN and MEGA MAN 2. Control Mega Man as you progress through enemy-filled stages and defeat Robot Masters. In the year 200X+ α , the mysterious scientific genius Dr. Wily’s plot to take over the world has been stopped by Mega Man, a super robot created by Dr. Light. Peace has been restored. However. Dr. Wily has been secretly planning to modify the work automatons developed by Dr. Light and tries once more to rule the world using these Robot Masters. As soon as Mega Man hears this, he heads into town to stop Dr. Wily once and for all .

Nintendo DSiWare
* Cosmos X2, Saturnine Games – €2 (Nintendo 3DS) 200 Nintendo DSi points (Nintendo DSi)
Take control of the Cosmos X2 as you journey through the solar system fending off the alien invasion. Fight your way to their home world to wipe out their army once and for all. Head into battle with a unique dual alignment weapon system, allowing the Cosmos X2 to switch between two different weapons at any time during battle. Use the Power alignment for maximum strength, the Repulsion alignment for a spread attack, or the Attraction alignment for a homing attack. Each alignment has its own health meter – Use them wisely to maximize your chances to survive.