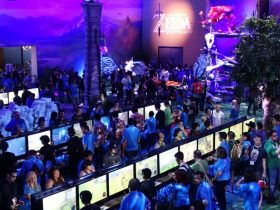 Virtual Console (Nintendo 3DS)
* Metroid II: Return of Samus, Nintendo – $3.99
Metroids threaten the galaxy, and only you can stop them. Bounty Hunter Samus Aran faces off against the Metroid scourge once again in this epic sequel to the NES classic, Metroid. Take control to guide Samus through cavernous corridors, ancient ruins, and alien traps. On the mysterious planet SR388, you’ll find artifacts of a lost civilization that grant amazing powers. Cut through creatures in a buzz-saw blur. Roll through hidden tunnels and climb sheer walls. Fight to the heart of the planet and search for the merciless Metroid leaders. If you are a cunning explorer, you’’ll earn the best of several super endings. Enter this exciting Metroid sequel and experience the thrills of this beloved series.

WiiWare
* Big Bass Arcade, Big John Games – 500 Wii Points
Big Bass Arcade is loaded with fishing action! Catch a boatload of fish and take a shot at the World Record Bass. Reel in Largemouth Bass, Muskie, Northern Pike, Bluegill, and Crappie. Compete in Challenges and Tournaments, or Free Fish any lake at your own pace. Big Bass Arcade is stocked with features: 4 fish filled lakes, 9 lures, and 5 multiple lake tournaments. High scores are tracked for every event on your quest for the World Record Bass.

Nintendo DSiWare
* Battle of the Elements, EnjoyUp Games – $4.99 (Nintendo 3DS) 500 Nintendo DSi Points (Nintendo DSi)
Can you save the planet? The Legendary Elements are the key to face human destruction, but they have to be mastered to unleash their power! Get ready to travel around the world facing the most powerful characters in intense battles of elements, where you’ll need to think as fast as you move your stylus in order to earn the victory.

* Come on! Heroes, Circle Entertainment – $1.99 (Nintendo 3DS) 200 Nintendo DSi Points (Nintendo DSi)
In a green field there is this small hill, and on the hill there are flowers… wait, where are the flowers!? Ok it must be the Heiress. This lively Heiress snuck out of the family mansion, to follow a burglar out of curiousity. The burglar, Archer, decides to kidnap the Heiress immediately for ransom, and ordered his men to handle her with care. The Heiress is happy in Archer’s mansion. She doesn’t realize her position, so she orders the men around. In the meantime, her father (Mr.King) receives Archer’s message and announced that anyone who brings back his daughter will receive a great reward. So a bunch of men, including those from other wealthy families, lead their men to Archer’s mansion…