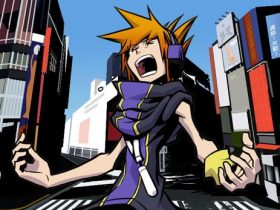 The World Ends With You sequel teased

3DS Download Software
* Fallblox, Nintendo – £7.19 / €7.99
Fallblox sees the return of Mallo, the sumo-wrestler-shaped hero from the original Pullblox, as he pushes, pulls and climbs his way to the rescue – but with gravity and a much bigger play field to contend with, he’s going to have his hands full. Take part in over 140 new challenges as well as 90 training stages or even create your own levels.

* Johnny Hotshot, UFO Interactive – £5.39 / €5.99
YEEE-HAAA! Johnny HotShot is an arcade action unlike any other. After being warped into the world of one of Johnny’s favourite arcade games, Cowboy Hotshot, Johnny must take on the role of sheriff and purge the town of the bandits led by Mr. Wang. Test your reaction skills in the Shooting Gallery, unleash justice upon bandits in the Saloon Shootout, and master the art of Lassoing bandits in Catch ‘Em All.

Nintendo presents: New Style Boutique, Nintendo – £39.99 / €44.99
In Nintendo presents: New Style Boutique, players take on the role of a shop assistant and must work their way up the glamorous fashion world to own their own boutique, giving customers advice and putting a look together for them. There are thousands of items and accessories to choose from, and players can also get judged on the looks they put together. This game is sure to delight anybody wanting to unleash their inner fashionista. This game will be available to download from 16th November.

3DS Download Demo
* Virtue’s Last Reward, Rising Star Games – Free
Solve the puzzles to escape your fate. Will you choose to ally, or to betray? Solve the puzzles and uncover the mysteries as you discover your own morality, with 24 captivating endings. There is no escape.

Nintendo DSiWare
* Magical Whip, Agetec – £1.79 / €1.99 (Nintendo 3DS) 200 Nintendo DSi Points (Nintendo DSi)
The Phantasmal Forest can be a dark, dangerous place when you’re an apprentice wizard. Ruled by monsters, the forest bewitches people with its strange power. The wizards can only use a single spell – one that turns their wands into a magical whip. Defeat enemies and collect valuable items as you battle your way through the forest in this exciting action game, packed with 50 haunting stages.

Deadly Premonition 2: A Blessing In Disguise Release Date Confirmed For This July