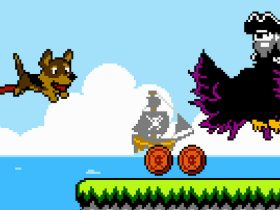 WiiWare
* Horizon Riders, Sabarasa – 800 Wii Points
Planet Zethos has fallen under the military control of Thau-Phi, a rogue Artificial Intelligence. Its absolute control of all automated systems on the surface includes a legion of labour robots, now acting as an impenetrable and selfless army protecting the A.I. core. Horizon Riders allows you to control any of the four squad members on their mission to defeat Thau-Phi, dashing at high speeds through the surface of Zethos on powerful hoverboards while destroying the renegade cybernetic army with their advanced futuristic arsenal.

3DS Download Software
* Planet Crashers, Ignition Entertainment – £9.00
As one of the youngest and brightest cadets to graduate from the esteemed Planet Crashers Academy, your first assignment couldn’t be much bigger. You are tasked with preventing an unknown evil from snuffing out the sun. Explore a massive universe filled with danger and adventure battling in dungeons to gain experience points, level-up weapons and advance to nearby planets.

Virtual Console (Nintendo 3DS
* Kirby’s Pinball Land, Nintendo – £2.70
Take a spin with Kirby in this Game Boy classic, to defeat King Dedede and his minions through the power of pinball. Bounce Kirby around three action-packed tables filled with enemies, bonuses and secrets galore. Kick back with wacky mini games and battle the bosses at the end of each stage. Kirby’s Pinball Land is filled with fun touches that Kirby fans will love and plenty of action for pinball wizards to flip over.

* Kingdom of Plants 3D, Atlantic Productions – Free
The exclusive clip offers an astonishing look at the secret lives of plants filmed at The Royal Botanic Gardens, Kew in London, revealing a dramatic world otherwise invisible to the human eye. Filmed over the course of a year, the clip is a revealing and fascinating new look at plant life through the use of stunning 3D time-lapse filming techniques.

Nintendo DSiWare
* Candle Route, Teyon – £1.80 (Nintendo 3DS) 200 Nintendo DSi Points (Nintendo DSi)
Sparky has been entrusted to bring the light to the Crayon Castle before nightfall. Lead Sparky through over 100 colourful levels to collect matches and light candles. Don’t be surprised to find various obstacles like bombs, puddles, dynamite or dead end paths. This unique and beautiful game will light a fire in the heart of every puzzle fan.

Nintendo Video
* Nintendo 3DS 3D Photo Contest – Free
Available this week via Nintendo Video is a compilation displaying some of the best winning photos from the Nintendo 3DS 3D Photo Contest which took place across Europe from April to June 2012. We received 138,069 photos from 22,423 registered users across 6 different categories and we wanted to showcase the very best of the best from the 19 participating European countries.

* Big Buck Bunny, Blender Foundation – Free
The film follows the adventures of the lovable rabbit as he seeks revenge on a trio of mischievous woodland creatures who have disrupted his peaceful daily routine, all in colourful 3D. If you didn’t catch it the first time round then be sure not to miss out again!