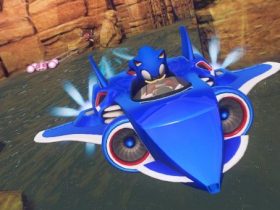 Nintendo of Europe have announced the latest content to be made available through the Nintendo DSi Shop and the Nintendo eShop on Wii U and Nintendo 3DS.

Special Offers in Nintendo eShop on Wii U (until January 3rd)
* Chasing Aurora, Broken Rules – £5.39 / €5.99 (usually £10.79 / €11.99)
Experience the dream of flight in Chasing Aurora, a physics-based 2D aerial action game. Up to five players fight in tournaments that span three disciplines. The single player mode is a race against the clock to unlock new levels. Evade lightning storms, waterfalls, icicles and rock slides in the unique world of Chasing Aurora.

* Little Inferno, Tomorrow Corporation – £8.39 / €9.99 (usually £12.99 / €14.99)
An Indie action adventure from the designers of World of Goo and Henry Hatsworth in the Puzzling Adventure. In Little Inferno you burn flaming logs, screaming robots, credit cards, batteries, exploding fish, unstable nuclear devices and tiny galaxies. An adventure that takes place almost entirely in front of a fireplace – about looking up, up, up out of the chimney, and the cold world just on the other side of the wall.

Video Game Hero Sale – Nintendo 3DS (prices until December 27th)
* Super Mario Bros., Nintendo – £3.69 / €3.99 (usually £4.69 / €4.99)
For more than 25 years, the Super Mario series has conquered the charts, and won the hearts of fans the world over. Now you can discover – or rediscover – the original NES game that made Mario a household name. Run and jump with Mario or Luigi through caves and castles, down pipes and across platforms, and face off against Bowser to rescue Princess Peach. It may be more than a quarter of a century old, but Super Mario Bros. is still as enchanting as ever.

* Dr. Mario, Nintendo – £1.19 / €1.49 (usually £2.69 / €2.99)
At Mushroom Kingdom Hospital, nasty viruses are on the loose. It’s time to give them a dose of Mario’s medicine. In this classic Game Boy puzzle game you must eradicate all the viruses in the bottle, by spinning and lining up the coloured vitamin capsules as they fall. The more lines of viruses you clear, the more points you rack up, scoring huge combos. But beware of side-effects: this game may be addictive.

3DS Download Software
* escapeVektor, Nnooo – £8.99 / €10.00
Vektor has been trapped inside the CPU for what feels like an eternity and you are his only hope of escape. As he travels through the CPU, help him recover his memories and destroy the different enemy types sent to hunt him. But be careful, the further Vektor gets, the more devious the CPU becomes.

* Gunman Clive, Hörberg Productions – £1.79 / €1.99
In the year of 18XX, the west is overrun by thugs and outlaws. A group of bandits have kidnapped Mayor Johnson’s daughter and are spreading havoc across the land. Only Gunman Clive can bring order to the west and save the girl. Jump and shoot your way across diverse and challenging levels and fight massive bosses. Gunman Clive is an old-school side-scrolling platform game set in the old west with full 3D graphics and a unique art style.

3DS price change
* Rising Board 3D, odenis studio – £1.79 / €1.99 (Was £2.69 / €2.99)
Do you miss the sandy beaches? Get your board and dive into the happy, colourful world of Pop Island. If you are looking for fame or just the beauty of a trick, join us. You’re joining a style, you’re joining a family. Put your board in the water and surf the wave. Slalom across the islands to collect sun points. You can use them to buy new boards. Whether you are riding a sailboard, or a kiteboard, a wakeboard or a surfboard, define your style and leave your mark.

* Castle Conqueror – Heroes 2, CIRCLE Ent. – £4.49 / €4.99 (Nintendo 3DS) 500 Nintendo DSi Points (Nintendo DSi)
Do you remember the war two years ago? This beautiful star was a breathtaking Green Planet thriving with life, before it was devastated by the Empire’s army. The inhabitants refused to remain silent any longer, so they rose up and fought back. After the inhabitants won a victorious battle over the Imperial army, a new government rose to maintain peace, and the army left the planet. An all-new 11 chapter story with more soldiers and vehicles armed with a variety of new weapons.