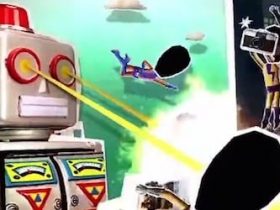 Know Your Friends is Ubisoft’s shelved Wii U exclusive

Nintendo of Europe deliver a colossal content update this week to the Nintendo eShop.

Mario and Donkey Kong: Minis on the Move, and The Starship Damrey lead the charge, with multiple Virtual Console releases arriving across Wii U, Wii and Nintendo 3DS.

Virtual Console (Wii U)
* Solomon’s Key, Tecmo Koei – £3.49 (€4.99)
To save his world from demons, Dana the Wizard goes on a dangerous quest to find Solomon’s Key and seal the monsters away. An audacious mix of action game and puzzler, Solomon’s Key was one of the toughest challenges on the NES, but also one of its most endearing adventures. Combine logic and reflexes to unravel the mysteries of each room. Bright minds are needed to unlock its secrets, and only a few have been deemed worthy of seeing all the different endings. Will you be clever enough?

* Xevious, Namco Bandai – £3.49 (€4.99)
Take control of your Solvalou fighter and strike deep behind enemy lines to destroy the Xevious forces! Use missiles against airborne enemies and bombs against ground-based targets, and watch out for the colossal floating fortress. Xevious is considered one of the forefathers of the vertical-scrolling shooter genre. Featuring unique enemies, a variety of environments and many hidden gameplay features, it’s an all-time classic that still gets the pulse racing!

Virtual Console (Wii)
* World Heroes 2 Jet, D4 Enterprise – 900 Wii Points
World Heroes 2 Jet, initially released in 1994, is the 3rd in the prolific fighting game series. Choose from 16 historical or well-known heroes, villains and fighters and battle your way to the top to become the world’s greatest warrior! There are two types of modes in this version, “Tournament of Titans Mode”, where you fight three bouts in one day, and if you are successful you move on to the next day, and “World Heroes Training Mode”, where you can fight with any opponent. Furthermore, the addition of dash and back step, which were not in the previous version, as well as a countering system that ushers in a more speedy way of fighting, makes World Heroes 2 Jet even more enjoyable to play. There are also four competition types to choose from, allowing for even more in-depth battles.

3DS Download Software
* Bloody Vampire, Agetec – £4.49 (€4.99)
Several years ago, a strange man made his way to the ruins of an abandoned castle on the outskirts of a small town called Verulia. Since then the locals fear the castle. Recently, a merchant travelled to Verulia and discovered the entire town was deserted. Her story was embellished, as disturbing rumours of a vampire inhabiting the castle spread like wildfire through the land. As Latis has become older and learned more about herself from Cereza, she feels she is destined by her heritage, to bring an end to any threat that vampires pose to humanity. Join Latis and Cereza on their adventure and discover the secrets buried deep in the ancient castle of Verulia.

* Crash City Mayhem, Ghostlight – £17.99 (€19.99)
Experience high-octane driving thrills with ‘Crash City Mayhem’. Blaze your way through the city streets and crush an evil syndicate of terrorists! Drive anywhere – rooftops, sewers, inside buildings, rail tracks and more! Use your driving skills to enter a world of espionage and action. Drive a huge variety of crazy vehicles including mopeds, supercars and tanks! Unlock a stash of secret items and vehicle upgrades.

* The Starship Damrey, LEVEL-5 – £7.19 (€7.99)
From two masters of suspense, Kazuya Asano and Takemaru Abiko, comes a new twist on the genre as players discover a fear born of innocence. You awaken to discover that you are trapped in a Cold Sleep capsule aboard the titular Starship Damrey with no memory of who you are or how you got there. With no tutorials, explanations, or hints provided, the game was created with the intent that self-discovery and experimentation be an integral part of the experience. An inconceivable truth awaits those willing to discover it. Do you dare to hope? Or will despair claim the final shreds of your mind? Discover the mystery of the Starship Damrey to find out for yourself…

* Reel Fishing 3D Paradise Mini, Natsume – £3.59 (€3.99)
Reel Fishing 3D Paradise Mini offers a fun and challenging experience for novice fishers and master anglers alike. Put your skills to the test as you must complete over 20 missions in a variety of different fishing locals. Each fish looks and moves so much like the real thing, it’s the closest you can get to real-life fishing without putting on your waders! Choose from a variety of lures to attract and hook the game’s numerous wily fish. Do you have what it takes to become the next great Fishing Master!

Virtual Console (Nintendo 3DS)
* Wrecking Crew, Nintendo – £3.59 (€3.99)
In NES classic Wrecking Crew, Mario and Luigi swap their plumber’s caps for hard hats as they take on the role of demolition engineers! One or two players must demolish every obstacle in each enemy-infested level, while working out the most destructive route through the networks of ladders and scaffolds. Wrecking Crew also includes a mode for designing your own levels. This Virtual Console version also features the ability to save your creations, which was not possible in the NES original.

Nintendo DSiWare
* Color Commando, CIRCLE Ent. – £1.79 (€1.99), 200 Nintendo DSi Points
Color Commando is a new and very cool puzzle platform game. In this game you get to hunt for
treasure! However, many evil color monsters are blocking your path! Pick up color blobs and try to outsmart the monsters! In each level, color monsters will block your path and try to grab you! So what can you do against this? Collect paint blobs that are spread out over the level. You can use a paint blob to paint a big paint-spot on the world. If a monster of the same colour comes into contact with the paint-spot, the monster will dissolve into the spot. When this happens the monster cannot harm the player! The game starts out easy enough, but before you know it you are surrounded by many different types of color monsters in all different colours! There are five worlds, each with four normal levels and one star level. You can unlock the star level by getting all the treasure in the other four levels!

Nintendo Video
* The Beet Party: UnderWaterMelon, Redrover – £0.89 (€0.99)
The Beet Party is a series of 3D short videos available for download on Nintendo eShop. The two-minute interstitials target four to six year olds and follow the adventures of the five coolest beets around as they explore, experiment, celebrate and communicate with beat-boxing sounds when something new arrives in their fridge. In UnderWaterMelon, a giant watermelon is placed in the fridge which causes some major space issues with the Beets.