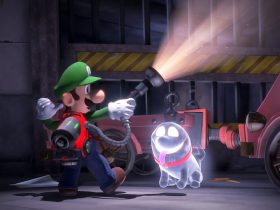 Next Level Games Behind Luigi’s Mansion 3 On Nintendo Switch

Nintendo eShop sale (Nintendo 3DS)
* escapeVektor, Nnooo – $4.99 (normally $9.99)
Vektor has been trapped inside the CPU for what feels like an eternity and you are his only hope of escape. As he travels through the CPU, help him recover his memories and destroy the different enemy types sent to hunt him. But be careful, the further Vektor gets, the more devious the CPU becomes!

Wii U Download Software
* Toki Tori 2, Two Tribes – $13.49
Our unlikely yellow hero may be the star of the show, but he won’t get anywhere without the creatures he meets along the way. You can whistle and stomp to influence them, and use their abilities in your advantage. As you play, the storyline unfolds. Your goal is to get to the core of the corruption and save the island!

Virtual Console (Wii)
* NAM-1975, D4 Enterprise – 900 Wii Points
Initially released in 1990, NAM 1975 is a third-person “shoot ’em up”, action game. The player takes the role of an American Special Forces soldier fighting through a harsh battlefield while moving left and right in front of the screen as enemies in the background shoot fiercely at the protagonist. Essentially, you fight with machine guns and other firearms, as well as hand grenades and the like; however, you can pick up new weapons from items. Not to mention, you can move at high speed while dashing, enabling you to get out of sticky situations if used adeptly.

Virtual Console (Nintendo 3DS)
* Castlevania, Konami – $4.99
Step into the shadows of the deadliest dwelling on earth. You’ve arrived at Castlevania, and you’re here on business: To destroy the curse of the Evil Count, once and for all. Take arms as Simon Belmont as you make your way through six monstrous floors filled with bats, ghosts, zombies and every kind of ghoulish creature that you can imagine. Use the legendary whip, Vampire Killer, and a host of deadly weapons to battle your way to Dracula’s chamber and to the ultimate duel of good versus evil.

3DS Download Software
* Gabrielle’s Ghostly Groove 3D, Natsume – $19.99
Gabrielle’s having a bad day. She sneezed her soul right out of her body! She’ll have to travel to Monsterville, the home of all things that go bump in the night, to get help. Only by busting out the ghostliest dance moves and thrilling and chilling people will she be able to scare up the power she needs to get herself back into her body! It’s a spooktacular rhythm adventure!

* Real Heroes: Firefighter 3D, Reef Entertainment – $9.99
In this first-person fire & rescue action game players will enter the soot-stained boots of an everyday hero as a newly graduated academy cadet getting their start in a big city fire station. Players must use the tools of the trade like the axe, hose and saw to battle raging blazes, tackle explosive environments and rescue survivors.