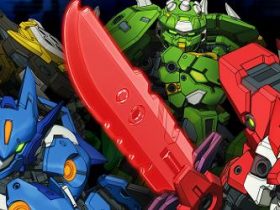 The Donkey Kong Country trilogy makes a welcome return to Wii’s Virtual Console service after it was pulled, also rounded off on Wii U and Nintendo 3DS with their concluding chapters. It’s a busy week for Wii U too, with Stealth Inc. 2: A Game of Clones, Falling Skies: The Game, and Tetrobot & Co. leading the new arrivals.

Halloween is well represented on Nintendo 3DS, with Joindots and Akaoni Studio serving up Undead Bowling and Zombie Panic in Wonderland DX respectively. But it is the long absent arrival of Shin Megami Tensei IV that will draw most attention for fans of the genre, while six Animal Crossing themes expand your opportunity to personalise the handheld’s menu screens.

Virtual Console (Wii U)
* Devil World, Nintendo – £3.49 (€4.99)
In this hidden gem of an action game from Mario creator Shigeru Miyamoto, you play heroic dragon Tamagon, who must defeat evil by collecting boa-boa dots inside a maze and destroying enemies with his fire breath. However, keep an eye on the devil at the top of the screen, who instructs his minions to move the maze in random directions, trying to squash Tamagon within its walls! If you own this title on your Wii, perform a system transfer from your Wii to your Wii U to receive a special upgrade price.

* Donkey Kong Country 3: Dixie Kong’s Double Trouble, Nintendo – £5.49 (€7.99)
Donkey Kong and Diddy have been captured by the Kremlings, so it’s Dixie Kong and new sidekick Kiddy to the rescue! In the final part of the classic Donkey Kong Country trilogy, take control of Dixie and Kiddy, and use their unique abilities to traverse treacherous terrain, seek out elusive Banana Birds, and defeat the Kremlings’ new master, KAOS. Featuring familiar and new animal buddies, two-player team and contest modes, and even more impressive graphics, Dixie Kong’s Double Trouble is double the fun! This is the US version of the game.

Wii U Download Demo
* Color Zen, Cypronia – Free
Color Zen is a new kind of puzzle game. One that invites you to put on your headphones, relax, and find your way through an abstract world of colours and shapes. With simple, intuitive controls, the game invites you to relax and immerse yourself. There are no points or penalties for failure; just an abstract world of colour to move through at your own pace. So put on your headphones and find your way, with Color Zen.

Wii U Download Software
* Cosmophony, Moving Player – £3.59 (€ 3.99)
Cosmophony is a musical shooter designed for demanding gamers seeking an original and intense gaming experience. You must control the heart of a fallen goddess within a dying universe in order to fulfil her destiny. Your goal is to progress through a series of levels designed to be played to an exhilarating, 100% drum and bass soundtrack by DJ Salaryman (DnB Arena, RAM records). Discover a powerful new gaming experience that is uniquely satisfying.

* Falling Skies: The Game, Little Orbit – £34.99 (€ 39.99)
Take command of a resistance squadron in a battle for mankind’s existence. Engage in over 90 tactical warfare missions and infinite side quests Customise your squad to outsmart the enemy.

* Jett Tailfin, Funbox – £17.99 (€19.99)
Enter this magical underwater world and win the coveted Shark Trophy in the intense hi-speed racing game! Face the challenges of the Deep where fish fear to swim! Train and master the use of weapons and magical power boosts to win and become Top Fin!

* Stealth Inc 2: A Game of Clones, Curve Digital – £12.99 (€13.99)
In Stealth Inc 2, you play the role of a clone escaping a sinister and high-tech testing facility. Stealth Inc 2 tests both your brain and your reflexes over 60 varied levels linked together in a sprawling overworld. Death is never more than a few moments away, but one of the few advantages of being a clone is that death isn’t all that permanent. With no loading screens and no lives to worry about, players are encouraged to use their inevitable demise as a learning tool as they navigate lasers, homicidal robots and terrifying bosses in the ultimate hostile work environment.

* Tetrobot & Co., Neko Entertainment – £7.49 (€9.99)
Tetrobot is the world’s most popular and reliable robot, but he’s not perfect. That’s why I, Maya, have built him a microscopic little brother, Psychobot. Help me guide Psy through Tetrobot’s cogs and circuits: by swallowing blocks of matter and spitting them out, we can repair anything. Learn how pipes, lasers, fans and other electronic devices work, learn how to alter the chemical properties of slime, and collect all the memory blocks that you find on the way. The owners of damaged Tetrobots all around the world rely on us because we are the only people who can repair their precious robots.

3DS Home Menu Themes
* Animal Crossing: New Leaf – Bulletin Board, Nintendo – £1.79 (€1.99)
The folders and icons look like they are made of wood. Scroll the Touch Screen to see cheerful flowers sway in the wind.

* Animal Crossing: New Leaf – Isabelle in the Town Hall, Nintendo – £1.79 (€1.99)
The folders and icons look like letters and stamps. Scroll the Touch Screen to see Isabelle daydream while she works.

Virtual Console (3DS)
* Donkey Kong Land III, Nintendo – £3.59 (€3.99)
Donkey Kong and Diddy Kong have gone to seek their fortune by finding the fabled Lost World, leaving Dixie Kong literally holding the baby. However, Dixie decides to find the Lost World before anyone else, bringing cousin Kiddy Kong along for the ride. Play as Dixie or Kiddy across 36 Kong-sized levels of platform-action and adventure. Get a little help from your animal friends Squitter the spider, Squawks the parrot, Ellie the elephant and Enguarde the swordfish, as you seek out secrets to uncover the truth behind the Lost World!

3DS Download Demo
* Color Zen, Cypronia – Free
Color Zen is a new kind of puzzle game. One that invites you to put on your headphones, relax, and find your way through an abstract world of colours and shapes. With simple, intuitive controls, the game invites you to relax and immerse yourself. There are no points or penalties for failure; just an abstract world of colour to move through at your own pace. So put on your headphones and find your way, with Color Zen.

3DS Download Software
* ARC STYLE: Baseball 3D, ARC System Works – £1.79 (€1.99)
This is a fun, full-scale baseball game that anyone can easily enjoy, with a 3D display that makes it easy to control. Enjoy 3 different game modes including Tournament, Exhibition and Custom. Tournament play consists of 7 teams. Defeat your opponents and aim for the championship. In Exhibition, you can select any team and play a quick game. You can also enjoy Network Matched via Download or Local Play. In Custom Mode you can customise your players in many ways including their names and even their appearance. There are 5 different ability types including defensive and offensive-oriented types, so you can configure your team exactly how you want. You can also attach pictures from the internal camera to a player so you can model them after yourself and have them compete. Enjoy baseball anywhere, and at anytime on the Nintendo 3DS!

* Shin Megami Tensei IV, ATLUS – £17.99 (€19.99)
The Eastern Kingdom of Mikado is a city of the chosen, sitting on high and protected all around by towering walls. Yet its people are at risk from an on-going demon threat that the player as a newly appointed Samurai is duty-bound to fight against. Throughout the player’s journey, they must choose their own path. The choices will affect them, other NPCs, and the overall outcome of the story. Decisions the player makes throughout the course of the story will have lasting repercussions, as the fate of the world hangs in the balance.

* Undead Bowling, Joindots – £5.99 (€6.99)
Welcome to Undead Bowling! Prevent hordes of blood-thirsty zombies from sinking their rotten teeth into your flesh by mowing them down with a cannon bowling ball! Turn on stereoscopic 3D for extra impact to make this the best zombie bowling experience you can get, until the world is overrun by zombies and someone opens a bowling alley. It’s sometime in the future and zombies have overrun the earth. The pins at the local bowling alley have been eaten so the owner has rounded up a good supply of zombies to use instead. Throw cannon bowling balls along the bowling lane filled with zombies to flatten as many as you can. Make use of three different types of bowling balls including a cannon bowling ball, a Hell Fire bowling ball and the devastating Mince Grinder, that tears through everything on the lane. Use the Circle Pad to steer your bowling ball into the zombies that crowd the lane, squashing as many as you can and preventing them from eating you alive!