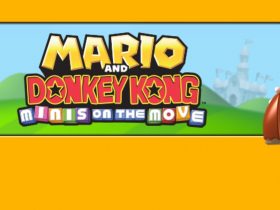 Mario And Donkey Kong: Minis On The Move Review

Another week has passed and so we once again find a new Nintendo Download list upon us for North America, which brings an even spread of new content across Wii U and Nintendo 3DS.

Most interestingly, Disney Infinity has become available to download digitally entirely free of charge. You still need the Disney Infinity Base and figures to play, but it’s a welcome opportunity for those that may consider upgrading to Wii U from Wii – following on from the news that Skylanders Trap Team will include a free Wii U download code.

Elsewhere, Life Force and Mega Man join Wii U’s Virtual Console service, while WayForward’s Xtreme Sports leaps onto Nintendo 3DS. The handheld is also treated to BlazBlue Clonephantasma and Demon King Box, while Midtown Crazy Race takes you back to the 90s on Wii U.

Virtual Console (Wii U)
* Life Force, Konami – $4.99
Blast your way through six stages of intense action and take on wave after wave of enemies, alternating between horizontal- and vertical-scrolling environments. Go at it alone, or invite a friend to pilot another ship and assist in the challenge. Do you have what it takes to save your planet from the monstrous Zelos?

* Mega Man 6, Capcom – $4.99
Mega Man 6 blasts onto Wii U’s Virtual Console service, which originally launched on NES. On the eve of the Grand Championship of the First Annual Robot Tournament, Mr. X announced that the entire tournament was just a scheme to get his hands on the world’s most powerful robots. Mega Man must battle through 16 levels to defeat his ferocious new foe.

Wii U Download Software
* Disney Infinity, Disney Interactive – Free
For the first time, Disney Infinity is available in the Nintendo eShop – and it’s free to download. Enjoy online multiplayer and more fun ways to play. Use your Wii U GamePad controller to create your own worlds in the Toy Box or activate missions and unlock toys in Play Sets. With Disney Infinity, the possibilities are endless. (A Disney Infinity Figure and Base, sold separately, are required to play the downloadable version of the game.)

* Midtown Crazy Race, Jose Varela – £4.99
This game is a tribute to the car games from late 90s, a madness race in Midtown.

Virtual Console (3DS)
* Xtreme Sports, WayForward – $4.99
Choose your hero and master sports like Skateboarding, In-Line Skating, Street Luge, Skyboarding and Surfing to become crowned the Xtreme Sports Champion. Can main characters Guppi and Fin battle their way to the top, or will they fall victim to the mischievous Bonehead Gang? Find out in this original mixture of sports, adventure and role-playing. The game features more than 400 competitors, multiple modes, power-ups and a tropical island lush with secret paths and hidden challenges.

3DS Download Software
* BlazBlue Clonephantasma, Arc System Works – $5.99
Cute versions of the BlazBlue characters fight against hordes of enemies in this action battle game. With just one button press, the characters show off a variety of impressive and cute moves. The rules are simple: just knock a certain number of enemies off the stage! Utilise each of the characters’ unique abilities to blast them away!

* Demon King Box, CIRCLE Entertainment – $3.99
Demon King Box mixes real-time strategy with classic RPG gameplay. Gather demons and heroes to join and aid your quest. Multiple types of minions can be gathered not only by conquering, but also by researching minions. The demon heroes can enhance the demon legion with their unique skills. Demons level up and get stronger not only by victory, but also by feeding them with their favourite food.