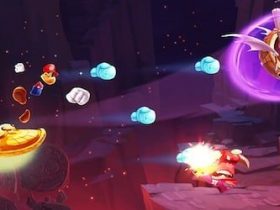 Rayman Legends to include exclusive Mario and Luigi costumes

Ubisoft have already provided DLC to extend your Watch_Dogs experience with the Conspiracy! and Access Granted Pack, while the Virtual Console is treated to two Natsume classics in Wild Guns and Natsume Championship Wrestling. Sonic Boom: Rise of Lyric and Sonic Boom: Shattered Crystal see digital release across Wii U and Nintendo 3DS respectively although early reviews haven’t been entirely positive, while there are plenty of new Home Menu themes on Nintendo’s handheld inspired by Pokémon and Super Mario.

Virtual Console (Wii U)
* Natsume Championship Wrestling, Natsume – £5.49 (€7.99)
Get ready to grapple with 12 outrageous wrestlers, and bring on the beat down! Wield the massive power of Asteroid, the lightning-fast strikes of Viper, the underhanded attacks of Phantom and many more kings of the ring! With its robust grappling system and more than 50 moves to master, Natsume Championship Wrestling delivers some of the deepest and most realistic wrestling action of the 16-bit era! Test your might against the crafty AI, or compete with up to 4 players in exhibition, tag team, and round robin matches. If you own this title on your Wii, perform a system transfer from your Wii to your Wii U to receive a special upgrade price. This is the US version of the game.

* Wild Guns, Natsume – £5.49 (€7.99)
It’s the wildest west you’ve ever seen in this action-packed third-person shooter! The Kid gang and their army of robots have taken over the town. The only ones who can stop them are Clint and Annie, two tough gunslingers with a serious score to settle. You’ll need a sharp eye and quick-draw reflexes, plus moves like the dive-roll and double jump. Plus, you can rope enemies with a lasso and clear the screen with explosive special attacks. It’s your job to bring justice back to town – or whatever’s left of it when the smoke clears! If you own this title on your Wii, perform a system transfer from your Wii to your Wii U to receive a special upgrade price. This is the US version of the game.

Wii U Add-On Content
* Watch_Dogs: Conspiracy!, Ubisoft – £3.99 (€4.99)
People aren’t always what they seem. In this case, they’re cyborgs from space. Don’t believe me? Try plugging in the Conspiracy! Digital Trip and we’ll talk after. You’ve got a specific lens to see their real faces. Find them, identify them, and kill them.

Wii U Download Software
* Rock Zombies, EnjoyUp Games – £6.29 (€6.99)
What would happen if a concert of a female rock band was invaded by a horde of zombies? The answer to that question can be found in this videogame which combines both classic gameplay from the Arcade Golden Age with modern 3D graphics.

* Sonic Boom: Rise Of Lyric, SEGA – £39.99 (€49.99)
In Sonic Boom: Rise of Lyric, Sonic and his friends Tails, Knuckles and Amy encounter an ancient tomb sealed deep within an island, where they come across a powerful snake-like villain named Lyric the last Ancient, who plans to power his army of robots with the Crystals to destroy everything organic and to create a world of twisted metal robots. The group must put aside their differences and work together as a team to save the world from Lyric’s evil plan and his army of war mongering robots! They will race across ancient ruins, the depths of the ocean and even back in time… This may be their biggest adventure yet. Do you have what it takes to help Sonic and friends defeat the evil Lyric and his robot army?

* Watch_Dogs, Ubisoft – £49.99 (€59.99)
You are Aiden Pearce, a brilliant hacker but also a former thug, who’s criminal past lead to a violent family tragedy. In a world led by technology, you will be able to hack and manipulate the city’s systems to stop traffic lights, detonate gas lines, turn off the electrical grid and more. The city of Chicago has become the ultimate weapon for a man bent on revenge.

* Sonic Boom Theme, Nintendo – Free
Deck out your Nintendo 3DS in style with this all new Sonic Boom theme.

* Super Mario (Blue), Nintendo – £1.79 (€1.99)
Characters and items from Super Mario feature in this cool blue and red theme. Scroll the Touch Screen to see some of them move.

* Super Mario (Neon Green), Nintendo – £1.79 (€1.99)
Characters and items from Super Mario feature in this stylish neon theme. Scroll the Touch Screen to see some of them move.

* Super Mario (Pastel Pink), Nintendo – £1.79 (€1.99)
Characters and items from Super Mario decorate this cute pastel theme. Scroll the Touch Screen to see some of them move.

Virtual Console (3DS)
* Lufia: The Legend Returns, Natsume – £4.49 (€4.99)
Wain always wanted to see the world, but he never expected he would end up fighting to save it! Follow the young warrior and his companions on an epic adventure that spans vast continents, as you try to stop an ancient evil. The third in the series, and the first for a handheld system, Lufia: The Legend Returns features 12 playable characters, each with their own unique personality and special attacks, plus a compelling storyline and in-depth battle and magic systems, including the return of Infuriating Point special attacks.

* Shin Megami Tensei IV: Snake Scale Equipment, Atlus – £0.75 (€0.99)
Three Delivery Challenge Quests, each with an armour piece of the add-on-exclusive. Deity Scales set as reward. Note: These Challenge Quests can be accepted early in the game.

3DS Download Demo
* Asterix The Mansions of the Gods, Bigben Interactive – Free
By Toutatis! Play Asterix The Mansions of the Gods! Play as Asterix, Obelix and Dogmatix in their quest to save the forest. Prepare the magic potion so you can give the crazy Romans lots of smacks! Walk through the village, hunt wild boar, make the bard stop singing and prepare the final victory banquet!

3DS Download Software
* 101 Pony Pets 3D, Selectsoft – £3.59 (€4)
What’s even more fun than a puppy for a pet? Your very own pony! With 101 Pony Pets 3D, you can have a pony friend to care for, teach, play with and love, all in amazing 3D. Choose from over 101 entertaining ponies—or simply adopt them all! Play a game of fetch in the park or teach your pony to dance, jump and fly. Reward your pet with a treat after each trick! Enter your pony into pet shows to earn toys, food, clothing and furniture, then dress up your pet with hats, glasses, shirts and more. Watch your pony up close and personal, as you zoom in, zoom out, tilt and rotate in real 3D. Enjoy fun minigames as you take your pony to the vet for checkups, give it a bath, romp in the yard and more.

* Asterix The Mansions of the Gods, Bigben Interactive – £29.99 (€34.99)
By Toutatis! Play Asterix The Mansions of the Gods! Play as Asterix, Obelix and Dogmatix in their quest to save the forest. Prepare the magic potion so you can give the crazy Romans lots of smacks! Walk through the village, hunt wild boar, make the bard stop singing and prepare the final victory banquet!

* Sonic Boom: Shattered Crystal, SEGA – £34.99 (€39.99)
In Sonic Boom: Shattered Crystal, Amy discovers a secret ancient language and manuscript detailing the history and whereabouts of a Lost Crystal of Power. The evil and vile villain, Lyric, kidnaps Amy in his eagerness to get his claws on this long-forgotten power that has been hidden throughout the jungles and canyons of a mysterious new island. Sonic must team up with Tails, Knuckles and newest member of the team Sticks who is Amy’s best friend as they follow her footsteps to save her from the clutches of Lyric and his robot army. Lyric is bent on powering up his army of robots and stopping Sonic and team at all costs in his quest to destroy the world. By working as a team, they will prove they are stronger together than they are apart.

* Tetris Ultimate, Ubisoft – £15.99 (€19.99)
The world’s most-loved puzzle game arrives on Nintendo 3DS, and is better than ever in Tetris® Ultimate. Enjoy ten exciting modes including four new challenge modes made for Nintendo 3DS: Master, Rotation Lock, Escalation and Invisible! Play solo or with up to ten players! Leaderboards make it easy to share your scores and see how you measure up against other players. Are you one of the best in the world?

Nintendo DSiWare
* Around the World in 80 Days, Joindots – £7.19 (€7.99)
Join Phileas Fogg and his faithful companion Passepartout on their wondrous journey around the world in 80 days! Collect all the items you need for the adventure by creating rows of three from identical symbols. By removing the symbols, the individual parts of the artefacts will end up in your suitcase. Mighty bonus items – like fireballs and bombs – will help you reach your destinations on time!