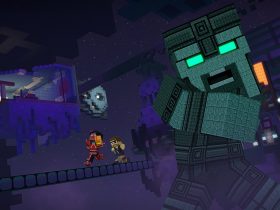 This week’s Nintendo Download list is positively bursting, with new releases across Wii U and Nintendo 3DS.

That marks the arrival of Ubisoft’s Child of Light and Ripstone’s Stick it to the Man on Wii U, with Castlevania II: Simon’s Quest adventuring to the console’s Virtual Console service.

On 3DS, free demos for Conception II: Children of the Seven Stars and THE “DENPA” MEN 3 The Rise of Digitoll will keep you busy, whereas new releases include Cave Story, Etrian Odyssey Untold: The Millennium Girl, Hometown Story, Mario Golf: World Tour, and Mystery Case Files Ravenhearst each offer something different.

Wii U Download Software
* Child of Light, Ubisoft – £11.99 (€14.99)
Child of Light is a coming-of-age story about a young girl named Aurora from 1895 Austria who wakes up to find herself on the lost fairy-tale continent of Lemuria. To get home she must fight against the dark creatures of the Queen of the Night, who have stolen the sun, the moon and the stars. Help her on her quest to save the Kingdom of Lemuria from the Dark Queen’s tyranny by bringing back the three sources of Light!

* Stick it to the Man, Ripstone Publishing – £6.99 (€7.99)
On an ordinary day, hard hat tester Ray has a bizarre accident and wakes up with a giant pink spaghetti arm sticking out of his brain, giving him extraordinary mind-reading powers. Ray can suddenly change the world with stickers, transforming his paper universe by tearing it, folding it and using the crazy stickers he finds (along with his awesome new powers) to solve mind-boggling puzzles! Sadly, Ray doesn’t have much time to get to grips with his new psychic abilities. Instead, he’s on the run from ‘The Man’ for a crime he didn’t commit. Can you help Ray out of this sticky situation? Get ready to tear it, rip it and Stick it to the Man!

Virtual Console (Wii U)
* Castlevania II: Simon’s Quest, Konami – £3.49 (€4.99)
Famous vampire hunter Simon Belmont is back, in Castlevania II: Simon’s Quest. Following his victory against Dracula in the original game, Belmont is struck by the Count’s deadly curse and must track down and destroy Dracula’s missing body parts to save himself. Castlevania II expands on its predecessor with the addition of new adventure elements and also a day and night system. During daytime, talk to the locals and gather clues and weapons, and prepare for the creatures that appear when the sun goes down!

Virtual Console (3DS)
* Galaga, Bandai Namco Games – £4.49 (€4.99)
Classic arcade shoot ‘em up Galaga was faithfully recreated for the home in this acclaimed NES version. Galaga became an instant classic with its innovative fighter combination system and varied enemy attack patterns. Control your fighter and shoot down the waves of invading aliens; and win bonuses in challenging stages by not missing a single enemy. If your fighter gets captured by an enemy, free it from the tractor beam and combine with it to form a dual fighter with twice the firepower!

3DS Download Demo
* Conception II: Children of the Seven Stars, Atlus – Free
It’s time for classmating! Monsters have invaded the world of Aterra, and only a few special individuals, imbued with the power of the Star God, are equipped to fight it. With only a small group of warriors and a narrow window of time in which their powers are at their peak, the solution is clear: combine your Star power to make magical Star Children to boost your forces in battle!

* THE “DENPA” MEN 3 The Rise of Digitoll, Genius Sonority – Free
The Denpa Men are mysterious creatures that live among radio waves. Invisible to the naked eye, they can only be seen and caught by looking through your Nintendo 3DS. In this game, catch Denpa Men, form your team, and head out on an exciting adventure across the world. All to save a special someone! This time, some Denpa Men can capture monsters, turning them into allies who can be summoned to your side. Capture powerful monsters to turn the tide of battle. Also, your Denpa Men friends now have their own little homes, which can be customised and decorated to suit your style.

3DS Download Software
* Azada, MSL – £10.79 (€11.99)
Trapped in a haunted room by his great-uncle, the adventurous Titus has asked you to help release him from the magical spell. To do this, you must solve the most mysterious puzzles of Azada. Crack the series of puzzles and fill in the missing pages of the enchanted book to free Titus from his prison.

* Cave Story, Nicalis – £6 (€7.25)
Cave Story takes you into a rare world where a curious race of innocent rabbit-like creatures, called Mimiga, run free. You wake up in a dark cave with no memory of who you are, where you came from or why you’re in such a place. Uncovering Mimiga Village you discover that the once-carefree Mimiga are in danger at the hands of a maniacal scientist. Their only hope rests squarely on the shoulders of a quiet, amnesiac boy who can’t remember his own name. Take control and learn the origins of this world’s power, stop the delusional villain and save the Mimiga.

* Etrian Odyssey Untold: The Millennium Girl, NIS America – £34.99 (€39.99)
Etria is a land that has long welcomed explorers, yet even they will discover stories untold. In Story mode, you will encounter the mystery of the maiden who has lived a thousand years. Should you brave Classic mode, you’ll experience the beautifully upgraded version of the original Etrian adventure, with new 3D graphics and gameplay improvements.

* Hometown Story, Rising Star Games – £29.99 (€29.99)
From Yasuhiro Wada, the father of the Harvest Moon series, comes a new heart-warming experience full of fun, laughter and excitement. Prepare yourself for a whole new life as you create your own Hometown Story! Having inherited a run-down shop, it’s up to you to return to your hometown and turn the place into something your late grandmother would have been proud of. Join forces with a magical sprite named Pochica and make new friends as the town grows along with your success. Expand the shop, discover fantastic new wares to sell, go on exciting adventures and even meet the partner of your dreams! Now with enhanced gameplay and new features, Hometown Story is the definitive version of Yasuhiro Wada’s vision.

* Mario Golf: World Tour, Nintendo – £34.99 (€39.99)
Grab your clubs and bring fun to the fore in Mario Golf: World Tour on Nintendo 3DS family systems! Join Mario and friends for engrossing golf action on your own, or tee off with players from all over the world in thrilling online multiplayer matches. The Mario Golf series is known for combining deceptively deep golf gameplay with ideas you could only find in a Mario game, and Mario Golf: World Tour is no exception! Master a range of courses sure to test even the most experienced player. It’s not all lush greens and blue skies though – take to the fairway on sandy shores, or shoot for the pin on courses inspired by the world of Mario!

You can get a free download code for Mario Golf (Game Boy Color) if you purchase Mario Golf: World Tour from Nintendo eShop by 29/05/2014! Mario Golf (Game Boy Color) is exclusively available through this offer until 29/05/2014! It will be available for purchase from 29/05/2014 for €4.99 (£4.49). If you take advantage of this offer, you can download it before the official release for free. The download code will be shown on the screen after purchase, and also on your receipt. You can redeem it immediately on your Nintendo 3DS system or redeem it on any other Nintendo 3DS system later. The download code is valid until 30/06/2014.

* Mystery Case Files Ravenhearst, MSL – £10.79 (€11.99)
Rumours surrounding the history of stately Ravenhearst Manor have circulated for decades. The recently acquired diary of Emma Ravenhearst may hold the key to unravelling the mystery behind this eerie place, but the pages are missing. You assume the role of the master detective as you unlock the secrets buried deep in Ravenhearst®, and scour a myriad of intriguing rooms in the manor in your search for cleverly hidden clues. Only when you have located and reassembled all the lost diary pages will you uncover the story of the house and, ultimately, solve the mystery.