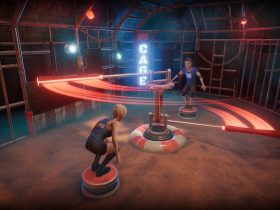 With only a week to go until Christmas is upon us, the Nintendo eShop continues to burst with plenty of new Wii U and Nintendo 3DS content to keep you busy!

While Download Demoes of Minecraft-clone Cube Creator 3D and Urban Trial Freestyle, the Nintendo 3DS similarly sees plenty of additions. You can defend the Gauls from their Roman invaders in Asterix The Mansions of the Gods, set out on adventure in Fairune, or battle to become Frognest’s true hero in League of Heroes.

Special Offers (3DS)
* Mega Man: The Nintendo eShop is celebrating Mega Man’s anniversary by offering up to 50 percent off select Mega Man games until 22nd December 2014.
* Nicalis: 1001 Spikes, VVVVVV and other fun games from Nicalis are on sale starting on 19th December 2014 – 5th January 2015.
* Shin’en Multimedia: Art of Balance, Nano Assault Neo and many more games from Shin’en on Nintendo 3DS are on sale until 14th January 2015.
* SteamWorld Dig: 50 percent off on Nintendo 3DS 1st January 2015.

Virtual Console (Wii U)
* Mega Man Zero, Capcom – $7.99
In this Game Boy Advance classic, after waking from a deep slumber, play as Zero in a fight for survival. Jump, climb and dash through an unstable world that struggles to keep peace between humans and Reploids. Upgrade weapons and collect helpful Cyber-Elves to conquer the destructive forces headed your way.

* Natsume Championship Wrestling, Natsume – $7.99
Choose between 12 wrestlers, each equipped with dynamic moves, and jump into the ring for some fierce competition. Play solo, or compete with up to four players in exhibition, tag-team or round-robin matches.

Wii U Download Demo
* Art of Balance, Shin’en Multimedia – Free
Puzzle games must be addictive. This was our top priority during the development of the game. That’s why we designed 200 levels that not only challenge your skills but also your imagination. With its perfect touch controls ‘Art of Balance’ is easy to pick up and hard to put away.

Wii U Download Software
* 99Moves, EnjoyUp Games – $2.49
99Moves, a retro arcade game where you will have to survive with just 99 Movements. Without a heading in the galaxy, all was lost because your energy was about to run out. gravity would chart the course of your destiny… Suddenly, V-99 entered a zone called Shaders, which provided energy. It was a new opportunity to survive. However, it was not all good news, as you only have 99 energy pulses to move through the Shaders zone.

* Blok Drop X Twisted Fusion, RCMADIAX – $1.99
Blok Drop X Twisted Fusion mixes a fantasy world with physics based puzzle mechanics to create an entirely new adventure. Guide the “GoGo” to safety by destroying the nearby enemies and clearing the gameboards of all remaining “bloks”. 50 levels in all to be unlocked make this adventure a challenging one even for seasoned puzzle fanatics.

* Meme Run, Ninja Pig Studios – $4.99
Introducing Meme Run! The only game in the world where you can go on an infinite running experience while dodging 360 noscopes and dank memes. The longer you stay alive, the more swag points you will earn. Collect illuminati’s and wombo combo’s to gain a multiplier to your swag points. Terrain is randomly generated which makes every experience danker. So m8, what are you waiting for? Tyrone rated the game 8/8 which means it’s not b8 so come play m8.

* Plenty of Fishies, Nitrolic Games – $4.99
Plenty Of Fishies is a game that challenges you to get the highest score possible in several different game modes, mainly by eating fish smaller than you to get bigger. With several different multiplayer and solo player options, the amount of fun to be had is almost endless.

* Toss N Go, RXMADIAX – $0.99
Toss N Go is an exciting game that pits the player against the CPU or a second player. You must strategically bank your points at the right moment before tossing the dice to the next player. If you like other RCMADIAX titles, you will enjoy this as well.

* Urban Trial Freestyle, Strangelands – Free
Take to the streets on your freestyle motorbike, using the urban landscape to pull spectacular tricks—backflips, 360s, wallrides, ollies, and more. Customize your bike to boost your performance with 64 possible configurations that let you choose from different engines, bodies, and wheels, and develop your own unique riding style.

3DS Download Software
* Asterix The Mansions of the Gods, Bigben Interactive – $34.99
Play as Asterix, Obelix and Dogmatix in a wild series of adventures inspired by the cult comic book. Roam freely through the Gaulish village, hunt wild boar, save the forest from Roman invaders and don’t forget to brew up enough magic potion to ensure victory, by Toutatis!

* Fairune, CIRCLE Entertainment – $2.99
A girl has been chosen to become a heroine. An adventure filled with mystery awaits her. During her adventure, she’ll need to find weapons to defeat monsters, and to level up. She also needs to collect items, find secret passages, and solve puzzles. Once she has unlocked three ancient statues, she has to seal a mysterious menace away forever.

* I Love My Horse, Bigben Interactive – $24.99
Raise your horse and win all the competitions! Open your own horse resort then raise and train your horse to win the agility, racing and show-jumping competitions to become the greatest of champions! Look after the horses placed in your care: keep them happy and in good health through a variety of available activities. Feed them, brush them, care for them and pet them!

* League of Heroes, Gamelion – $4.99
Take your place amongst the best warriors and become true hero of Frognest! Hack, slash and pummel your way through the endless Frognest Forest. Kit out your character with numerous armor and weaponry options – then design the best strategy to defeat your enemies!

* Toys Vs. Monsters, EnjoyUp Games – $1.99
Terrifying monsters have always been with us in our dreams and imagination. It’s time to get those fears out of our heads; it’s time to smash them all! Put yourself in the hands of the toys that have been with us in every generation!