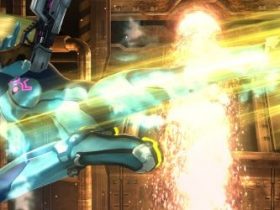 Ridley will fight by your side in Super Smash Bros. for Wii U

Nintendo Pocket Football Club kicks into touch to tempt wannabe managers across Europe to lead their teams to glory, with Konami’s Castlevania III: Dracula’s Curse questing onto the 3DS Virtual Console. Demos for Etrian Odyssey Untold: The Millennium Girl and Mario Golf: World Tour will provide some free fun, allowing you to try each title ahead of their respective launches.

* Golden Sun, Nintendo – £6.29 (€6.99)
Evil is slowly covering the world. Forces of darkness are pursuing the lost art of Alchemy, and the fate of mankind hangs in the balance. You and your companions, armed with weapons, Psynergy magic, and a host of elemental creatures, must return peace to the world. Golden Sun is an epic role-playing game with an engrossing story, set in a massive world. Gather the elemental Djinn – fire, water, wind and earth – and combine them in unique ways to produce awesome magical effects.

Wii U Download Software
* My Exotic Farm, BIP Media – £4.49 (€4.99)
At the beginning of the game, all you own is an empty field, a few pennies and a single little ostrich. You need to feed your ostrich, take care of it and improve its lifestyle. Well-fed with seed, your ostrich will lay eggs which can then be sold to the Shopkeeper. With this money, you can buy new animals at the Farmers’ Market.

Virtual Console (3DS)
* Castlevania III: Dracula’s Curse, Konami – £4.49 (€4.99)
Fight back against Dracula in the third exciting instalment of the highly popular Castlevania franchise! As with the original ‘Castlevania’, the player’s goal is to work their way through deviously challenging levels, but this time there’s a difference – when the level ends, you can choose one of two paths to take for a completely different experience!

3DS Download Demo
* Etrian Odyssey Untold: The Millennium Girl, NIS America – Free
Etria is a land that has long welcomed explorers, yet even they will discover stories untold. In Story mode, you will encounter the mystery of the maiden who has lived a thousand years. Should you brave Classic mode, you’ll experience the beautifully upgraded version of the original Etrian adventure, with new 3D graphics and gameplay improvements.

* Mario Golf: World Tour, Nintendo – Free
Grab your clubs and bring fun to the fore in Mario Golf: World Tour on Nintendo 3DS family systems! Join Mario and friends for engrossing golf action on your own, or tee off with players from all over the world in thrilling online multiplayer matches. The Mario Golf series is known for combining deceptively deep golf gameplay with ideas you could only find in a Mario game, and Mario Golf: World Tour is no exception! Master a range of courses sure to test even the most experienced player. It’s not all lush greens and blue skies though – take to the fairway on sandy shores, or shoot for the pin on courses inspired by the world of Mario!

3DS Download Software
* Nintendo Pocket Football Club, Nintendo – £10.79 (€11.99) until 1st May 2014, normally £13.49 (€14.99)
Head up your own football team and shoot for the top! Nintendo Pocket Football Club puts you in the manager’s seat at your very own football club, only on Nintendo eShop on Nintendo 3DS. Can you keep the crowds chanting and guide your pint-sized players from the lower leagues to the wonders of the world stage? As manager, train up your players and choose your tactics wisely to make the most of their abilities. Once you’re satisfied, send your team forth and watch your decisions play out in matches packed with action – but don’t be afraid to alter your approach if it all starts to unravel before your eyes. Delve deep and show plenty of skill on the side line and you could lead them all the way to the glorious treble of the Pro League 1, the Federation Cup and the European Challenge Cup. With enough work, you could even bring the World Club Classic back home!

* Putty Squad, System 3 Software – £17.99 (€19.99)
Putty Squad is a no-holds-barred retro gaming experience brought to life for the modern gamer. Our hero, Putty, can inflate, morph, stretch, punch and absorb, taking on ferocious enemies on his mission to rescue imprisoned putties. Putty Squad features lovingly created levels that will test your timing, skill and imagination in a charming and incredibly addictive adventure.

Nintendo DSiWare
* I am in the Movie, CIRCLE Ent. – £1.79 (€1.99) / 200 Nintendo DSi Points
By using real time visual effects, this software literally puts you inside famous Hollywood movies. Now you can be the actor or director and recreate famous scenes or create your own ones.