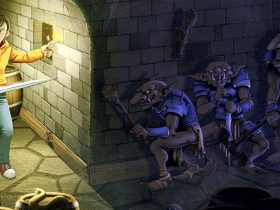 Special offers, price drops and new arrivals continue with this week’s Nintendo Download list, which is led by the arrival of indie action-puzzler Teslagrad.

The Virtual Console sale continues to mark the arrival of Hyrule Warriors, with numerous The Legend of Zelda titles temporarily discounted, while Rising Star Games celebrate their 10th anniversary by placing their games on offer.

New arrivals come in the form of Super Mario Ball and Mega Man Xtreme 2 across Wii U and 3DS Virtual Console services respectively, while Nintendo’s handheld allows you to become a Manga artist with Comic Workshop and practise English letters and sounds in Phonics Fun with Biff, Chip & Kipper.

Virtual Console (Wii U)
* Super Mario Ball, Nintendo – £6.29 (€6.99)
Roll up, roll up! See Mario in his most unique guise ever, as a pinball! In Super Mario Ball, a visit to a fairground sees Princess Peach turned into a ball and kidnapped by Bowser, so the perky plumber clambers into a cannon and shoots after her. Ricochet around the themed levels, consisting of deviously designed pinball tables, and defeat enemies to collect coins and stars. Rack up enough stars to unlock doors to new areas — but you won’t be able to progress until you defeat each boss. So what are you waiting for? Roll to it!

Wii U Download Demo
* Wooden Sen’SeY, Neko Entertainment – Free
Wooden Sen’SeY is an action-platform game set in a unique Japanese Steam Rock world that is
full of humour. You follow Goro, a village chief, through a series of levels on his quest for vengeance. He defeats his enemies using his axes to slice, dice, squash and grapple! Wooden Sen’SeY aims to offer players a unique gaming experience inspired by old school game mechanisms while incorporating modern technology and magnificent 3D graphics.

Wii U Download Software
* Teslagrad, Rain Games – £13.99 (€14.99)
An electrifying action-puzzler, intended to challenge both your wits and your reflexes. The laws of physics are yours to command! Discover ancient conspiracies and forgotten technologies, as you make your way through a place you were never meant to tread…or were you? Armed with ancient Teslamancer technology and your own ingenuity and creativity, your path lies through the decrepit Tesla Tower and beyond.

Virtual Console (3DS)
* Mega Man Xtreme 2, Capcom – £4.49 (€4.99)
In Mega Man Xtreme 2, return to the worlds previously seen in the Mega Man X series, and play as either X or Zero, facing a new danger that threatens all Reploids. Reploids are being turned into lifeless shells as if their souls have been erased, so X and Zero must hunt down the culprits. Switch between X or Zero as you battle enemies and defeat deadly bosses. Gather power-up parts to increase your abilities, equip special weapons unique to X or Zero, and solve the mystery to restore the Reploids’ missing souls!

3DS Download Software
* Comic Workshop, Collavier – £5.39 (€5.99)
Ever wanted to make your own Comics or Manga? No need to wait any longer, here is the software you were looking for! With Comic Workshop, you will be able to easily create Comics and Manga, step by step, thanks to the various tools available. From frame management to text entry, everything you need to make the best creations is gathered in this software. Speech Bubbles, Pattern Filling, Stickers or other Roller Stamps are not only useful but also fun to use!


A useful guide for parents which contains detailed information on how the software works, and which provides helpful tips on how to help your child get the most out of it, can be downloaded from www.nintendo.co.uk.