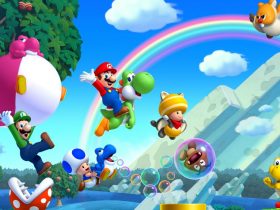 Europe is treated to a quieter Nintendo Download this week, although one that is still filled with quality content across Wii U and Nintendo 3DS.

Infiltrate planet Zebes in Game Boy Advance’s Metroid: Zero Mission which joins Wii U’s Virtual Console service, or take control of artificial intelligence ARID in Over The Moon’s award-winning The Fall. The Wii U’s rounded out by Wii’s Punch-Out!! stepping into the ring, as well as Cypronia’s My Style Studio: Notebook.

Meanwhile Nintendo 3DS takes the wheel with SEGA’s 3D Out Run, and Bigben Interactive serve up Shanghai Mahjong. Even more tempting, however, is an enviable slate of special offers that place SEGA, Capcom, WayForward, Joindots and CIRCLE Entertainment’s software at a significant discount over the next few weeks.

Virtual Console (Wii U)
* Metroid: Zero Mission (Game Boy Advance), Nintendo – £6.29 (€6.99)
In this acclaimed retelling of the original Metroid adventure, step into the boots of bounty hunter Samus Aran as she infiltrates planet Zebes for the first time, to take down the Space Pirates and Mother Brain… but this is not the Zebes that you might remember! Metroid: Zero Mission features completely redesigned environments, based on the original maze-like levels, but enhanced with new features like Morph Ball launchers and zip lines; and it’s crawling with vicious new enemies and bosses. Plus – once you’ve defeated Mother Brain, the mission is far from over!

Wii U Download Software
* My Style Studio: Notebook, Cypronia – £2.69 (€2.99)
Create fantastic paintings, sketch, take notes or make a flipbook animation. This is the place where players of all ages can enjoy painting using a full set of powerful yet easy-to-use image editing tools. Use the pen or pencil to sketch or make your notes, and the brush and smudge tool to paint gorgeous artwork. Mix your photos with drawings and paintings or make a flipbook animation. You can also personalise your notebook by drawing on the cover. When you’re done, share your creation by posting to Miiverse!

* Punch-Out!!, Nintendo – £17.99 (€19.99)
Get your gloves on and return to the ring – Punch-Out!! is making a comeback! An intuitive control scheme takes you closer to the action in the ring than ever before! Unleash hooks, uppercuts and Star Punches by swinging the Wii Remote and Nunchuk, or flip your controller sideways to enjoy the classic NES control scheme. As big-hearted Bronx brawler Little Mac, you’ll have to launch a one-man assault on the boxing world as you bid to become undisputed champ of the Minor, Major and World circuits. Along the way you’ll lock horns with the likes of Glass Joe, Von Kaiser and the hard-hitting King Hippo. A total of 13 flamboyant fighters stand in your path, every one with a creative new way of trying to make sure you end up face-down on the canvas. Have you always thought you could have been a contender? Then get ready to rumble in the all-action Punch-Out!! for Wii.

* The Fall, Over The Moon – £6.99 (€9.99)
Experience the first story in a mind bending trilogy! The Fall was recently awarded Game of the Year for Best Story from Giant Bomb. Take on the role of ARID, the artificial intelligence aboard a high-tech combat suit. ARID’s program activates after crashing on an unknown planet. The human pilot within the combat suit is unconscious, and it is ARID’s duty to protect him at all costs! As she progresses into her twisted and hostile surroundings, driven to find medical aid before it is too late, the realities of what transpired on this planet force ARID to reflect upon her own protocols. ARID’s journey to save her pilot ultimately challenges the very rules that are driving her. The Fall is a unique combination of adventure-game puzzle solving, and side-scroller action, all set within a dark and atmospheric story. Exploration will be paramount to surviving your adventure. Utilise ARID’s flashlight to uncover a myriad of interactive objects. If what you uncover is hostile, switch on your laser sight and kick some metal! Get ready for a disturbing journey as you fight, explore, and think your way forward, expanding ARID’s world, in spite of her protocols.

3DS Download Software
* 3D Out Run, SEGA – £4.49 (€4.99)
3D Out Run is the critically acclaimed 1986 driving game designed by Yu Suzuki, re-mastered and enhanced for the Nintendo 3DS hand-held system. 3D Out Run includes all of Out Run’s original content, alongside two new songs and runs at 60 frames per second, which is twice the speed of the original version.