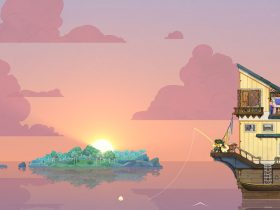 If there was one game that I have always seen as an absolute necessity for the Nintendo Switch, it would have to be Nidhogg. A back-and-forth explosion of tag fused with the skillful art of fencing, the original Nidhogg was like acting out a fight scene from the Count of Monte Cristo while being warped into the retro dimensions of the Atari 2600. It is also one of my absolute go-to games when inviting friends over for a good old knees-up. This well-deserved sequel in the form of Nidhogg 2 originally struck PlayStation 4 and Steam in August last year – with no mention of a Nintendo Switch version in the works. Thankfully, developer Messhof has eventually come to their senses and now we can finally stick our enemies with the pointy end anytime and anywhere.

For those that have never heard of Nidhogg before, the rules are very simple. Both combatants face off smack, bang in the centre of a sprawling stage made up from a collection of screens. The idea is to strike your opponent down with your weapon and make a run for it towards the goal at the enemy’s side of the level. If your opponent strikes you first, they have the priority to run. Victory awaits once you have sprinted all the way to the finish line where a giant worm is waiting to gobble you up.

Just like in the original, you can parry a weapon swung from the hand of your opponent, throw your weapon to nail a ranged kill and even reclaim any weapons dropped by either you or your enemy. You can jump, dive-kick, knock your adversary into pits or stamp them into a pulp in order to activate that all-important arrow marker to signify that you now have the upper hand. Think of it as a collection of timeless playground games. It has the sting and bragging rights of slapsies, the anticipation and reads of rock, paper, scissors and the agonising stubborn endurance of a staring competition. A single match can last for ages if both competitors maintain their skill and wit to stand their ground. It’s a simple formula that’s incredibly easy to learn and awakens that desperate drive to do anything to become victorious. 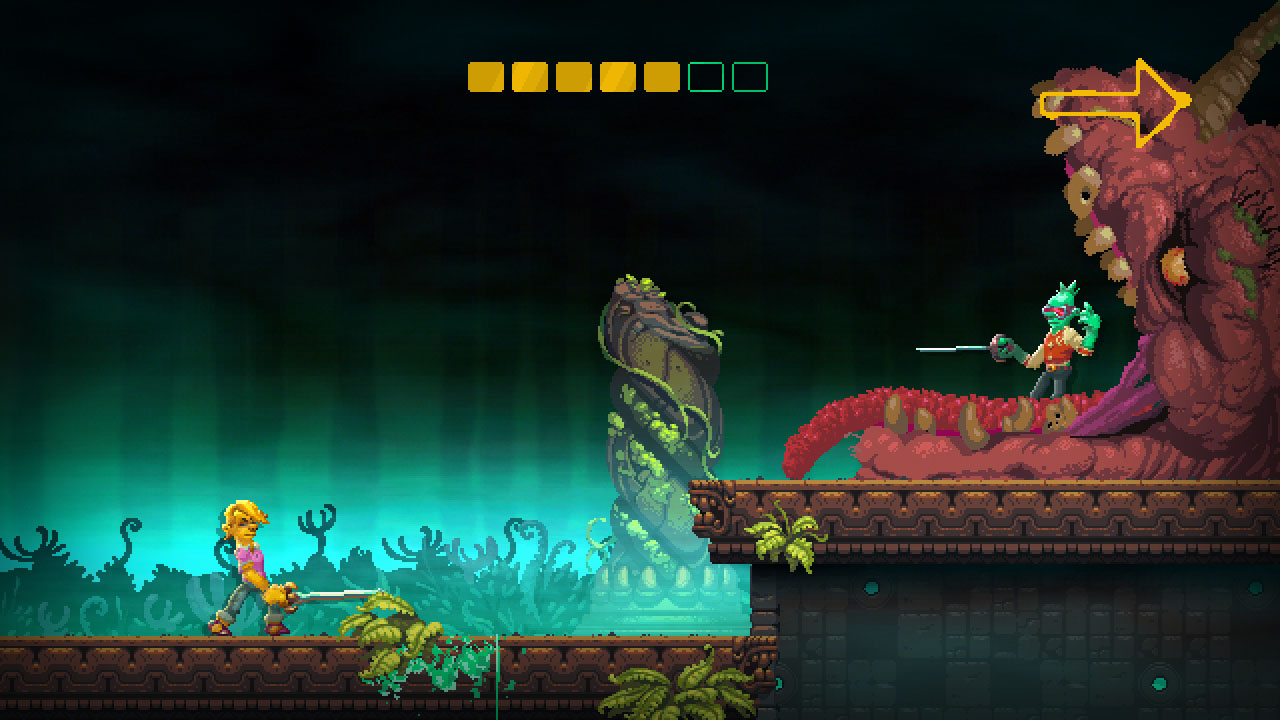 The most notable gameplay change in Nidhogg 2 is that you now have a selection of weapons to choose from outside the classic rapier. The broadsword is a heavier but stronger weapon with a vertical slice to deal with a dive-kicking opponent. The dagger is a small yet nimble blade that works nicely as a fast-flinging projectile. The bow and arrow, on the other hand, is a little slower to fire and needs to be kept drawn to stay effective. It could have easily of been the broken tool out of the box, but thankfully, there’s still somewhat of a learning curve to get the most out of its use. Weapons are usually handed to you randomly when your character springs back to life once you have been slain. Any weapon can also be turned off and adjusted in the options to meet your tastes – a handy feature should you wish to stay strictly within the field of the original rules.

Speaking of rules, there’s more customisable flexibility to the world of Nidhogg 2 this time around. As well as finally being able to set a time limit to cap a match, you also have access to a screen full of cheat modifiers to completely stir up the action. Some of these modifiers – such as boomerang weapons and low gravity – are fun to play around with, while the more dire options will have you crawling on your knees like a baby, or undergo a single sudden death match.

One customisable option I would have liked to have seen would be having the ability to actually count the kills as a winning condition on a timed match. Unfortunately, your only option is to simply get thrown into a sudden death scenario as the be all and end all. What does seem like a step back from the previous game is that it no longer displays any kills or suicides once a match has ended. God knows why the developer decided not to implement such an important fact sheet. For it’s clearly a simple, yet necessary feature for players to reflect and argue over post-fight. 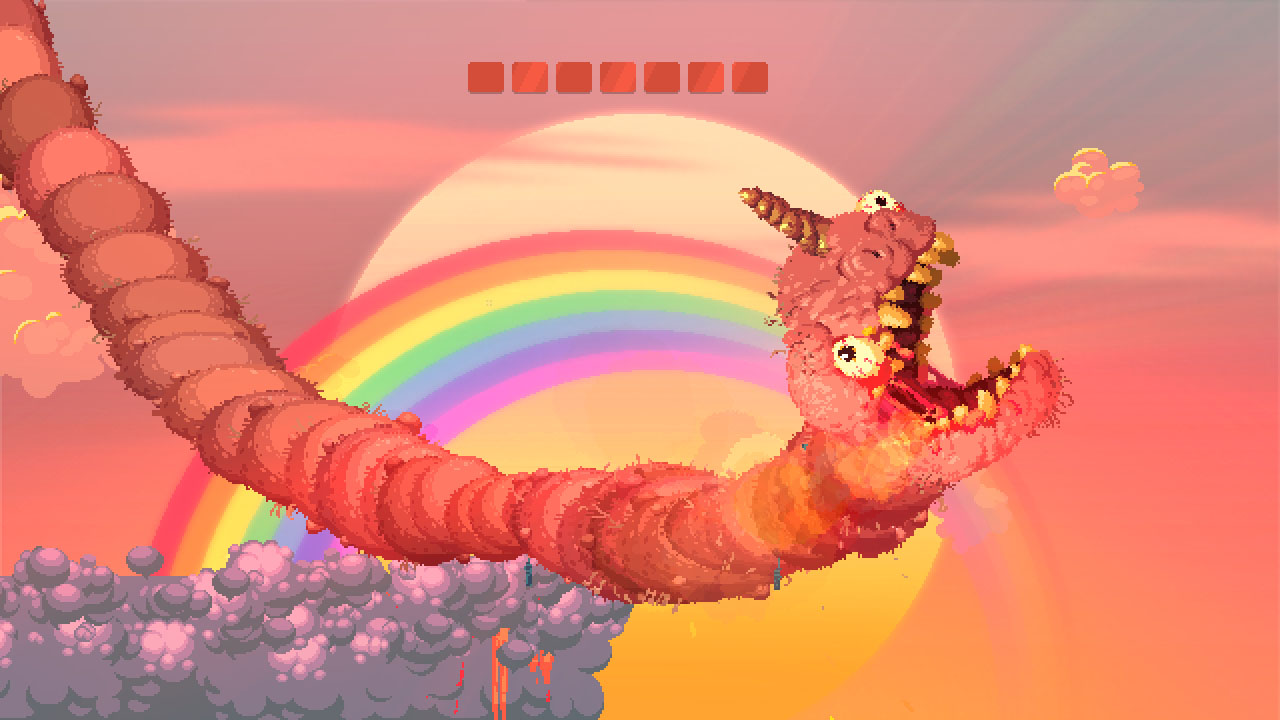 If you are familiar with the original Nidhogg, then you will notice that its sequel has had undergone a rather drastic facelift. Gone are the simplicity of stick men and the limited background colours in exchange for a somewhat different, albeit braver and more colourful art choice. The character designs are questionable, but the new art direction does lend Nidhogg 2 an undeniable uniqueness and expands much further across the 11 accessible environments, as opposed to the basic four available in the first game.

While the stages are full of eye candy and diversity, The customisable characters themselves come across like wired plasticine version of The Muppets. They don’t appear to move nearly as fluidly as the simple cluster of blocks that made up their original form. Instead, they have a sort of awkward shadow puppet animation to them with limited limb articulation for comedic value. While the movement itself does still reflect the fast-paced antics of the first, not having the option to swap to a classic skin seems to me like a complete missed opportunity. The audio in Nidhogg 2 builds upon the first game this time around though, with every stage having its own catchy funky beats that fit their theme so wonderfully well.

Despite Nidhogg 2 being equipped with both a very basic arcade and online VS mode, they honestly don’t do the game nearly as much justice as teaming up with a gang of mates for some traditional local multiplayer fun. Nidhogg 2 is such a perfect fit for the Nintendo Switch and is an absolute treat as a companion for drinking games. Best of all, you can bracket up a local tournament for up to eight players should you want to whip it out your bag at a Christmas party.

No one can deny how well Nidhogg 2 suits the Nintendo Switch. While the controversial new art direction may split the fan base and the lack of kill count record comes across as a strange absence, this stabby sequel’s healthy amount of new stages and a fun weapon system still makes it an absolute must for couch competition.