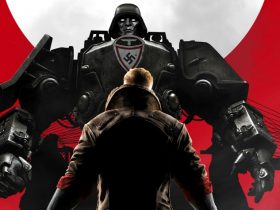 For those that don’t know, Ni no Kuni: Wrath of the White Witch is a beautiful looking JRPG made by developer LEVEL-5 – of Professor Layton fame – and Studio Ghibli, which if you’re a fan of anime, you’ll probably know how big of a deal they are. The game itself draws a lot from the Pokémon series, but also brings with it plenty of its own ideas to the table.

Ni no Kuni: Wrath of the White Witch actually made its debut on a Nintendo system, we just never got to experience it over here. Ni no Kuni: Dominion of the Dark Djinn released exclusively in Japan in 2010. This was then remastered (or remade) on the PlayStation 3 to positive acclaim. So it’s a shame then, that we never got the chance to experience the original build of the game and Nintendo fans have had to wait until now to experience the game for the first time.

The Nintendo Switch version is simply a port of the original PlayStation 3 game and not a remaster like the recently released PlayStation 4 version. They are both the same game and both include all previously released DLC. The only difference is the resolution and frame-rate, with the Switch coming in at 720p and 30 frames per second, whereas the remastered version can either be played in 4K and 30 frames per second, or a lower resolution and 60 frames per second. The most important thing though, is it runs very well in both TV and handheld modes on Switch. 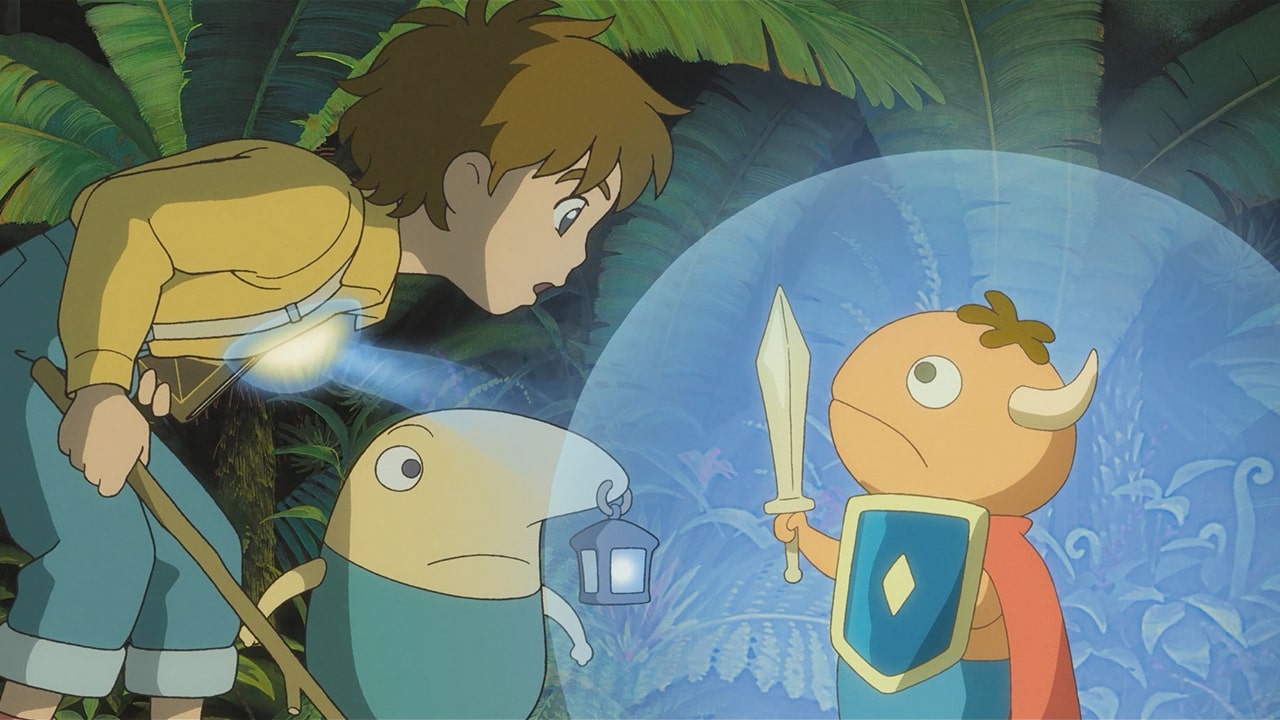 What this all equates to is a fantastic looking game, even all these years later. We have some incredible looking cutscenes, a good story and production values of the highest order. Everything is simply phenomenal. Even the music is fantastic. From the overworld to towns and even battle music that, no matter how many times you hear it – which will be a lot – never gets boring or repetitive and that is a testament to how good it is. Even the voice acting is good, with the highlight certainly being Drippy. It is a shame that not all dialogue is spoken however, as a lot of it is subtitled instead.

Players assume the role of Oliver, a loveable, innocent and kind-hearted kid who lives in Motorville with his mother. I will not go into full details to avoid any story spoilers, as its better to experience it for yourself, but his world gets turned upside-down in a heart-wrenching manner. During his lonely moment of unhappiness, his tears awaken his stuffed toy, who turns out to be a Fairy with a Welsh accent called Drippy. Drippy is from another world and asks Oliver to help save his world from the evil Shadar. In helping Drippy, there is also a chance of reversing the events that unfolded beforehand in Oliver’s world, so he cannot say no. Two birds, one stone. It’s a strong start story-wise, but does the story stay strong throughout and fully realise its potential? Probably not, but it still sucked me in and kept me wanting to play, despite any of the shortcomings elsewhere.

With a strong start under its belt, it all sounds great so far. However, it by no means maintains this strong start, as it is clear that early on Ni no Kuni: Wrath of the White Witch requires patience. It does not get into its stride until a good few hours in. During the first hour, you will be forgiven for thinking this is an interactive story, as not a whole lot happens gameplay-wise and you are mainly just sat watching things unfold. Don’t get me wrong, this is fine. Again, it’s a slow starter and you need to realise this before going in. The game starts picking up once you get shown the ropes, the battle system gets introduced, you start wandering around the world map and the gazillion other things in the game start coming into play. 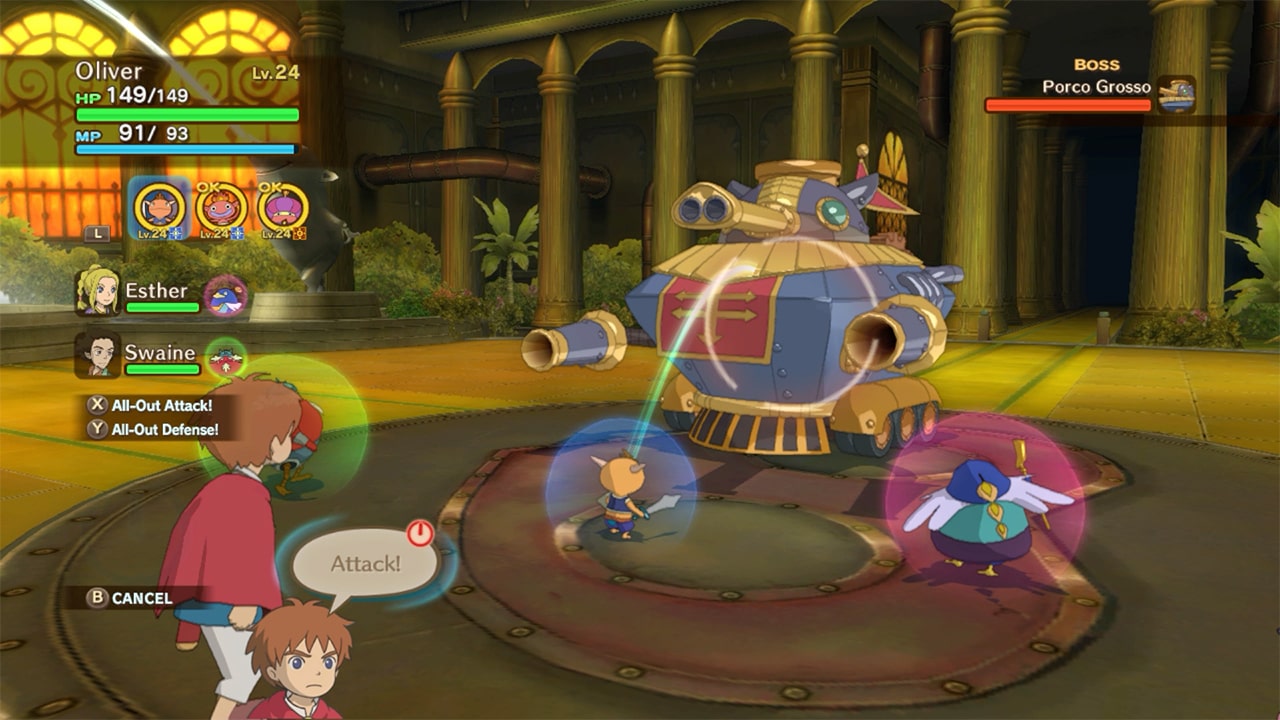 Let’s start off with the battle system then, shall we? Foes appear before you in the game world, it isn’t random encounters, so you know a battle is about to happen before it actually happens. Similar to the Mario & Luigi series, when you see an enemy, if they don’t see you, you are able to get the upper hand by getting to them before they know you are there. If you do this, you will be able to get a free hit in on them. Likewise, if an enemy in the overworld gets a jump on you, you will not be able to attack for a short period and will be vulnerable to attack. You can also choose to run past enemies if you like, although sometimes it’s hard to make it past them without them getting to you first.

Once you get into a battle, on one hand, it is very reminiscent of Pokémon – more on that later – on the other hand, it certainly has its own thing going for it. It’s all played out in real-time and you are able to use standard attacks, defend – if a big attack is coming your way – magic such as fireballs and heal. Between attacks, you are able to run around the area freely, dodging enemy attacks and deciding on your next move.

You do not need to fight with Oliver however, as you can also send out Familiars to fight instead. In a similar-sounding fashion to Nintendo’s Pokémon series, Familiars act very much as Pokémon do. They all have different abilities, attacks, strengths, and weaknesses. Familiars gain experience at the end of each battle and level up alongside Oliver and gain stat increases too. As you make your way through the game, you will find yourself relying much more on the Familiars, as opposed to Oliver. You will still be required to use him during battles however, as the stamina of Familiars depletes naturally over time, so you have to switch back out when needed. Again, the Familiars have strengths and weaknesses, similar to Fire Pokémon being weak to water and so on. It’s not as robust as that, as there are far, far less ‘types’ here, but it still requires you to have a good mixture in your party so you are equipped for all challenges that come your way. 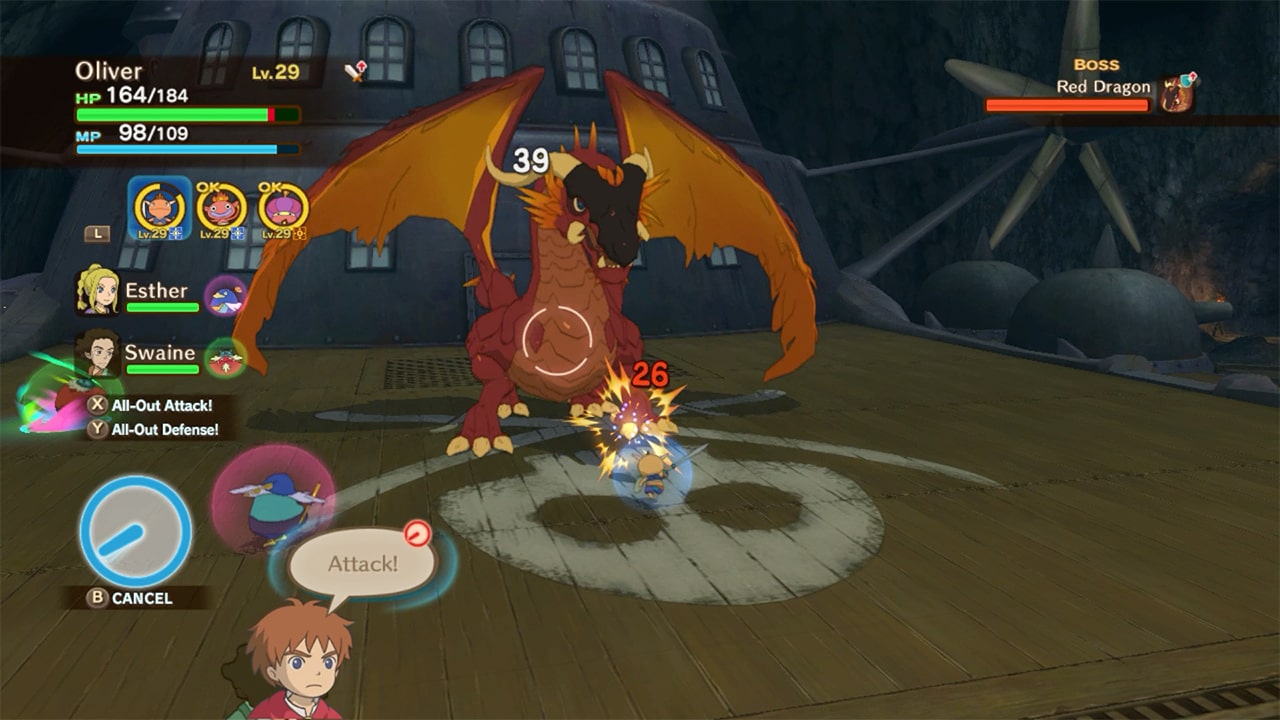 Originally when playing, I was praising the battle system because at first, I loved it. It seemed so different to anything I had played before and I felt more involved in the battles than I do with other turn-based RPG’s. However, once the smoke clears and reality sets in, battles actually start to become a chore, as it’s a lot of the same stuff, repeated over and over again. This is especially true when you are making your way through some of the linear areas, so you will naturally come across enemies that you cannot really avoid, so you are having battle after battle after battle and it just gets a little too much. I know you could say the same for other RPG’s, as the battles mostly stay the same throughout the course of the game, but something here just started to get boring and I wished I didn’t have to battle as much as I had to.

Carrying on with the Pokémon influences, Familiars can also metamorphose, which is to effectively say, evolve. All Familiars can metamorphose into two further stages, however, just because they are evolving into something better, they are not getting better straight away, quite the opposite. You see, when you choose to metamorphose a Familiar – the first stage is usually between level 10 and 20 – it will actually drop back down to level 1 again, with really bad stats once more. The benefit of doing this, however, is once you reach back up to the same level, your Familiar will be much better and much stronger than it was. Therefore, what you ideally want to be doing – and something I learned the hard way – is to stagger when you choose to metamorphose your Familiars because otherwise, you will be roaming around with a load of weak creatures at your disposal.

There are so many other aspects of Ni no Kuni: Wrath of the White Witch yet to talk about, but one aspect springs to mind straight away and that is errands and bounty hunts. These are effectively side quests and they add a whole lot more to the already lengthy adventure. They are worth your time completing too as each one you complete rewards you with stamps that fill up a Merit Stamp Card. Once you fill one of these cards up you are able to exchange them for various useful things such as being able to sneak up on enemies easier and allowing you to run faster.

I had my ups and downs with Ni no Kuni: Wrath of the White Witch. It is an amazing looking game with a brilliant soundtrack to back it up. It has an engaging and touching story and a cast of genuinely likeable and fun characters. The only real downside is the combat. While it is fun and new, to begin with, it slowly starts to lose its appeal the more battles you get into to, to the point where it ends up feeling more like a chore.