If this wasn’t clear by aesthetic nor design, the player isn’t even provided with the option of creating a male character. For whilst New Style Boutique wouldn’t be the kind of game that I would naturally turn my attention to, it isn’t hard to at least recognise its allure.

We begin outside Verano, gazing at an outfit that stands alone in the shop window. Evie, the manager, spots you gawping and invites you inside to take a closer look. She’s a famous stylist, and her fashion boutique is held in a similarly high regard. 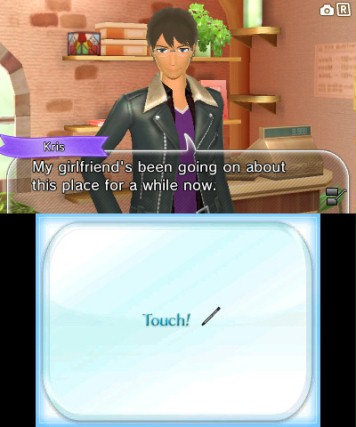 Having introduced herself, a customer soon arrives at the store and Evie wishes to see whether you have an eye for fashion. It is here that the game’s core design becomes first apparent. You’re tasked with finding clothing that suits their requirements, and, if successful, this rewards you by earning Happiness.

Happiness can be earned by pleasing customers, changing outfits and redecorating, and is gathered in a jar. Overnight, it is emptied into the moon, with promised rewards awaiting you once it is filled.

In any case, Evie spots your innate talent for fashion styling and soon hires you as a sales assistant for the boutique. Whilst you begin under Evie’s watchful eye, progression will see you eventually manage your own boutique, which includes the freedom to alter its appearance and purchase stock of your own choosing. With over 12,000 items of clothing and accessories available to you, such choice seems never-ending.

The stock may be purchased from the Exhibition Hall, with numerous stores providing varying styles of clothing. Anything you purchase is also duplicated for your own wardrobe, with samples delivered to your apartment by courier. It isn’t an entirely feminine affair either, with male clientele also visiting your store to purchase menswear items. 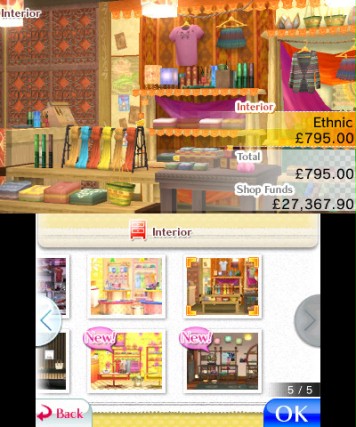 Customisation plays a key role within the game, with the player not only able to alter their appearance but also granted the ability to redecorate their apartment. New Style Boutique makes great strides to ensure that everything feels personalised to the individual and should be applauded for doing so.

Humorously, New Style Boutique is also designed to ensure that your character doesn’t look inappropriate. Having dressed my character with a bunched up shirt, skirt and shoes I was greeted with the message: “Underwear Visible! Please add more clothing to the upper body to avoid exposing any underwear.” I couldn’t progress without adding an ‘Inner’ layer, although bizarrely these include bikini tops. At least the game’s trying to encourage players to look respectable…

Progression will also open up areas of the town, allowing you to visit locations such as the Hair Salon, Beautician, Café, or simply taking a walk in the park. 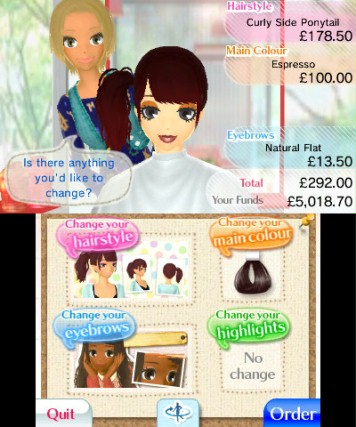 It doesn’t end there either, with the incorporation of online services allowing you to launch a separate Web Shop in which you can create three separate outfits to sell to other players. StreetPass sees support, with players able to exchange Stylist Cards with each other. Once you’ve swapped, you can visit each other’s boutiques or exchange outfits.

So, New Style Boutique may not entice the broader Nintendo 3DS install base, but demonstrates a carefully crafted game that will surely encourage further female players to invest in the handheld.