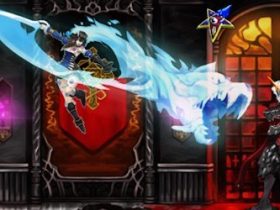 Bloodstained: Ritual of the Night reveals stretch goal for Wii U port

Quizzed by Smosh Games as to whether Nintendo have any desire to return to F-Zero, Shigeru Miyamoto reasoned that they would like to “create a new type of controller interface” for the futuristic racer before it’ll make a comeback.

“We see a lot of other designers who are making more traditional racing-style games, so we have tried to focus on something that feels a little more ‘gamey,'” Miyamoto began, touching on the company’s approach to the genre.

“So, maybe if we create a new type of controller interface and we find one that’s particularly suited to F-Zero then we’ll do something again with it in future. Actually the lead designer on F-Zero, who I worked with on the original, is Mr. [Takaya] Imamura. I worked together with him also on the original Star Fox, so, right now, the two of us are busy working on the next Star Fox game.”