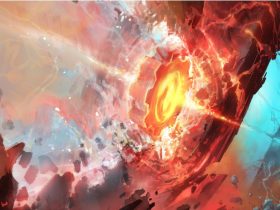 Gear Gauntlet Whirs Toward Wii U

Bit Dragon has announced that their neon-soaked arena brawler Hyper Jam will release on Nintendo Switch this week.

Promising fast-paced multiplayer arena gameplay for up to four players, you play as ’80s-inspired characters who must use katanas, rocket launchers, sledgehammers and more to slaughter your opponents.

Battling it out in dangerous arenas that range from a sun-drenched Miami hotel rooftop to a gritty Neo-Tokyo subway, after every round each player will be able to choose new perks that will stay with them for the rest of the game.

In local multiplayer you will be able you use a Nintendo Switch Pro Controller, dual Joy-Con or a single Joy-Con to get in on the action, while Local Wireless play is support as well as having the chance to test your skills online – complete with cross-platform matchmaking.

This is all set against a synthwave soundtrack that features Carpenter Brut, Dance With The Dead, Meteor and more, that the developer promises “will keep hearts racing as you blow each other to bits.”

Hyper Jam will release on the Nintendo eShop for Nintendo Switch worldwide on 17th April 2020.