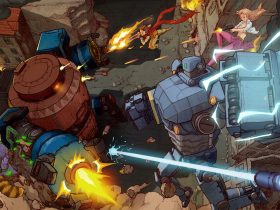 Lightning Rod Games has announced that A Fold Apart will release on Nintendo Switch in June, a narrative-driven puzzler that takes inspiration from designer Mark Laframboise’s real-life story.

It explores the relationships that we have with those we care about while separated by long distances, in the complexity of (mis)communication and reuniting two people greatly in love with one another.

There are two sides to every story, and, in A Fold Apart, an architect and a teacher have been forced apart by their careers. Puzzling your way through a world built of paper, you will see the difficulties they encounter while separated.

“A Fold Apart may be based on my own real-life experience with a long-distance relationship, but the feelings of being apart from a loved one are much more universal than that,” explains Lightning Rod Games co-founder Mark Laframboise.

“One of our main goals for the story has been to make it accessible and relatable to anyone who plays it, including those who may not have experienced a long-distance relationship themselves.”

A Fold Apart will release on the Nintendo eShop for Nintendo Switch worldwide in June.