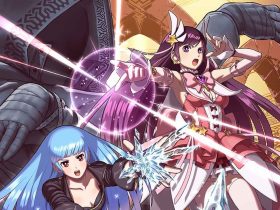 Whenever there’s a popular anime that centres around hot-tempered characters beating the stuffing out of each other, you can pretty much guarantee a licensed 3D arena fighter will follow suit. Dragon Ball Z, Naruto, One Piece, One Punch Man and Kill la Kill, to name a few, are all part of the club to a varying degree of quality and design. The concept certainly makes sense when taking into account the freedom of movement and bombastic energetic possibilities. Yet, It’s often no big surprise that this particular corner of fighting game is frequently snubbed when considering its rather lacklustre track record. With that said, it would still be nice to finally find an arena fighter to represent the sub-genre in a way that can deliver the popularity, depth and technicalities of some of the more preferenced 2D fighters to dominate the competitive market.

The first My Hero One’s Justice did somewhat come teasingly close in aiming in the right direction. The on-the-nose telltale signs of a colour-coded rock, paper, scissors provided a very basic, yet practical sense of strategy. Even a fan of the series with little to no experience of fighting games could easily learn to read and react to the gameplay without committing to often overwhelming technicalities. However, as fun as the first game was, the all too familiar element of rinse and repeat soon sunk in once the glitz and glamour of over-the-top action began to wear thin.

It goes without saying then, that whether you are a fan of the smash-hit anime series My Hero Academia wanting to step into the shoes of your favourite character, or just looking for a decent arena brawler to stomp around in, the rules of the ring are simple enough to grasp. Each player picks a main character to clash “quirks” with (the anime’s jargon for super-human abilities) along with two selectable assists to throw a boot in when a bit of back-up is required. The general rule of thumb is that each main fighter can mash out a target-combo, a dedicated double-jump and guard button, as well as two other character-specific special attack buttons to mix things up a bit.

Simply combining inputs such as tilting the Left Stick in conjunction with each attack usually results in changing the property of the move. This way the player can concentrate more on the whole colour-coded rock, paper, scissors-based mechanic I was referring to earlier rather than strict or complicated inputs and combinations. Moves that turn the fighter yellow are regarded as a damage-absorbing counterattack, red results in a risky unblockable attack and any moves that don’t possess any colour at all are considered a normal attack. This pretty much leads to the triangle formula of normal stuffing unblockable (red) attacks, unblockable penetrating both guard and counterattacks (yellow), and counters trumping normal attacks.

Adopters of the first game will be very familiar with the rules and could easily be forgiven to think that My Hero One’s Justice 2 is merely an expansion of the original on first sight. After all, the game clearly employs the same engine from its previous entry with a bit more polish and extra cinematic tilt of the camera to enforce a more dramatic, heavy-hitting feel to it. Thankfully, there does seem to be just enough effort made to somewhat justify itself as a sequel once you delve a little further into the gameplay.

In My Hero One’s Justice 2, there are a handful of new universal mechanics set in place that can generate a few fresh possibilities which were lacking in the previous game. For starters, the meter that was once tailored exclusively to build up the powerful and flashy Plus-Ultra techniques can now be used for additional Dash-Cancels to enable longer strings of attacks for more pressure and possibilities. Another new way to spend some Plus-Ultra meter is to Guard-Cancel incoming attacks when blocking for a table-turning reversal to gain the upper hand. On top of that, the stamina meter that was once only rationed to guard incoming attacks can now be shared with a side-stepping tactic to bait the opponent to over-commit themselves into being opened up like a Christmas present.

It’s not just the main fighters that get all the buffs. The assist characters too can employ their own team meter-burning Plus-Ultra attacks while otherwise loitering around as a Get Out of Jail Free card waiting to snuff out an incoming combo. While these additional features can be seen as small adjustments to combat, they do quickly become important tactics that the gameplay needed with the welcome added responsibility of meter management. I wouldn’t go as far to say that the combat as a whole is quite as refined when compared to the more meticulous 2D fighters out there, but the game is starting to feel overall more thoughtful and dynamic with a faster dose of speed, and heavier sense of collision.

The starting roster has almost doubled to 38 with roll-over fighters from the first game boasting various new adjustments and additions. If cosmetic customisations were your bag first time around, you will be pleased to know that this area has increased dramatically. Whilst it isn’t something that I personally care for, it does come particularly in handy not to stir confusion when facing a mirror match online.

The amount of stages has also increased to 25 in total, although some are just day and night alternatives with the original 15 copied and pasted over from the first game. The more notable change to the environments is how the ring-outs from the previous game have now been scrapped in favour for a handful of rather flakey cosmetic destructible stage-transitions as an attempt to push the boundaries of chaos even further.

As for the story mode, it basically retraces later arcs of the anime series very much in the same style the original did by mixing comic panels with the odd in-game action scene here and there. Personally, I’ve never been a big fan of retreading past canon exploits as they never do the original source material any justice. I always much prefer a new side story penned around the content it represents without the threat of stepping on the toes and spoiling what otherwise is always better experienced by simply watching the anime or reading the manga.

Other than your usual training, arcade and all-important versus modes to throw some limbs around in, there’s a new take on the mission mode which is pretty much a collection of generic survival maps with a turf wars spin to it. What is a spanking new feature though, is the possibility to throw down in local four-player matches where human-handled assist characters can get stuck into the action. Unfortunately, I couldn’t test this portion of the game out due to the inability to fill the missing gaps with CPU fighters to make up the numbers.

In regards to online, fights came in thick and fast with a surprisingly high percentage of good connections. The online options are pretty much what you would expect to see with ranked, unranked and lobby options available. There were a few gripes I had when it comes to handling the structure of online as there really hasn’t been any effort made to improve the faults of the original. There’s no ranked best out of three, or any form of a rematch of any kind for that matter. There’s also no way to accept or see connection strengths nor are there any penalties for losing any points during a ranked loss. While I’m a mediocre player at best, I would still much rather have my fortune told by the better fighter and work to earn my way to a higher rank.

While My Hero One’s Justice 2 plateaus in many areas, it does often improve where it matters most. The original game was always fairly attractive and its sequel does look and feel better overall with tighter loading times and slightly less chugging than its predecessor. It may not be the EVO arena fighter that nobody was expecting it to be and the amateur cameraman from the first game seems to still have his job. However, it does maintain and build upon that decent romp of pick-up-and-play action that suits well for its cause, with a more than adequate amount depth for the part-time fighting game fan to play around with.