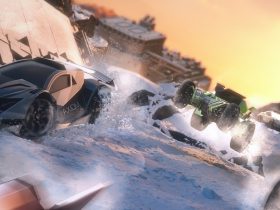 Mantis Burn Racing Tears Up The Track On Nintendo Switch

Artifex Mundi has announced that My Brother Rabbit will release on Nintendo Switch, a hand-painted puzzle-adventure that’s set in a surreal world that mixes reality with a child’s imagination.

When their daughter falls ill, a family hopes to cure her with the treatment that she needs. Her older brother wants to help however he can, soon turning to the power of imagination and wonder to take her mind off what’s happening.

In this land of make-believe, a small rabbit must look after his friend flower who has become afflicted with a strange sickness. He sets out on a journey to find those that can heal her, collecting objects hidden in the world like butterflies, insectoid lightbulbs, and other items to solve the riddles that he is confronted with.

These secret objects can then be used in more than 30 minigames, some as simple as colour-matching puzzles while others can see you repair a fantastical musical machine.

“We feel that players will form a bond with the children in My Brother Rabbit because of their enduring spirit,” explains Artifex Mundi CEO Tomasz Grudziński. “Though this story begins with a tragedy, these children always hope for a brighter future.”

My Brother Rabbit will release on the Nintendo eShop for Nintendo Switch worldwide on September 21st, priced at $14.99.