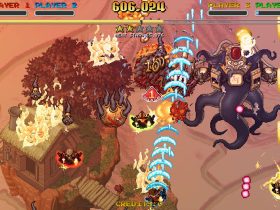 NACON and Teyon have revealed that Monster Truck Championship is in development for Nintendo Switch.

In this simulation game, you will have the chance to climb aboard a giant truck and participate in multiple competitions. That will require that you master the vehicle’s physics to either set new race records or perform realistic tricks.

There are 25 circuits to race around set in different cities across the United States, and several game modes to sink your time in that include Freestyle, Race, Destruction, Time Attack and an Online multiplayer mode for up to eight players.

You can look forward to choosing from 18 “completely customisable” vehicles, with the option to improve their acceleration and top speed with a finely tuned engine, adjust its stability through suspension stiffness, modify your grip with tyres selected for the competition you are participating in, and more.

The Career mode will see you take part in different tournaments, upgrading your Monster Trucks while managing your team and finances – with your ultimate goal being to become the Professional League Champion at the Monster Truck Finals.