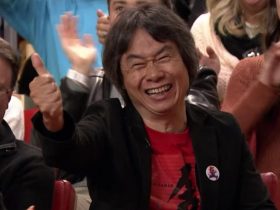 The Legend of Zelda Wii U has now reached “a really fun stage of development,” where any ideas that Nintendo has can be quickly implemented into the game.

That’s according to Shigeru Miyamoto, who recently took time out of his busy schedule to pay Smosh Games a visit with Nintendo of America’s Bill Trinen.

“Walking around in that massive world, and moving from one place to another within it feels really nice,” Miyamoto began, asked to share what he was excited for in 2015. “It’s at the point now where every idea that we have for it we’re able to implement into the game right away, so it’s at a really fun stage of development.”

Nintendo took the opportunity in December to share new gameplay footage at The Game Awards 2014, revealing the Wii U exclusive’s scale and Link’s new ability to leap from Epona to fire arrows down on his enemies.