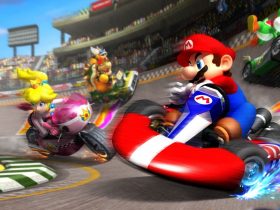 This twist on traditional point-and-click games has a branching story based on your decisions as a bartender. You will chat with customers and serve them life-changing drinks as Jill, who works at a dive bar frequented by average citizens in a cyberpunk future ruled by the mysterious Zaibatsu Corp.

There are 24 drinks to concoct and no one correct drink to serve in any situation, with characters impacted by whatever cocktail you choose to pour them.

Every character has a story to tell, whether that be discussing transhumanism with Stella Hoshii, a human who has cat-like genetic modifications or debating the finer points of morality with Dorothy Haze, an android sex worker.

“We were inspired by old-school adventure games, and really wanted to create a narrative experience without the pressures of obtaining a particular ending,” explains Sukeban Games co-founder Christoper ‘Kiririn51’ Ortiz.

“Every story you hear is important, and drinks served to even the supporting characters can have tangible impacts on progression through the game.”

VA-11 HALL-A: Cyberpunk Bartender Action will release on the Nintendo eShop for Nintendo Switch in Q1 2019.