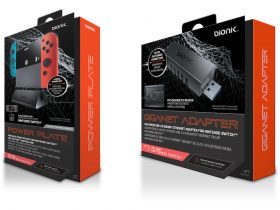 Headup and Julian Laufer have announced that Outbuddies DX is “coming soon” to Nintendo Switch.

This 2D side-scrolling adventure game has been created “in the spirit of the classic Metroid” and will see you explore Bahlam, a sunken city of the Old Gods located deep in the South Atlantic Ocean.

After becoming shipwrecked, adventurer and maritime archaeologist Nikolay Bernstein regains consciousness 36,000 feet under the sea. Severely wounded and unwillingly connected to a supernatural Buddy-unit, he searches for answers about his displacement only to discover that an ominous presence lurks in its shadowed caverns.

With non-linear gear-based progression for both combat and level layouts, you must dash, dodge and blast your way through Bahlam. You will use your ever-trustworthy robot sidekick Buddy to manipulate and scout your surroundings through hacking, scanning and telekinesis, with the chance to access an expanded tool set by teaming up with a friend in local co-op multiplayer.

Outbuddies DX will release on the Nintendo eShop for Nintendo Switch worldwide in 2020.