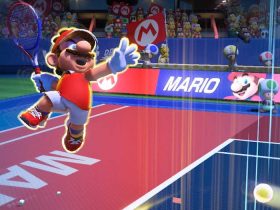 Nintendo and Camelot have released a new software update for Mario Tennis Aces, that sees the intense tennis game now on version 2.2.0.

This extensive update has added a new Court Selection screen to Free Play and Swing Mode, and added the new Hosted Match mode. This will require three Nintendo Switch consoles – one for each of the two players and another for the host – with the host able to display the match split-screen (Up Button), or swap between the P1 screen (Left Button) and P2 screen (Right Button).

You can either compete against one another through LAN Play (unsurprisingly requiring a LAN cable), or in Online Play, where you will need a Nintendo Switch Online membership and all players must be registered as a friend on the host’s portable home console.

The Co-op Challenge mode is back with Boo Hunt, played in Swing Mode where four players must work together to build up their score. Your reward, as a second chance, is to unlock three different-colored Boo visors.

Beyond that, certain character abilities have been rebalanced, AI for COM players has been improved, and the angle of Rosalina’s hair before she serves when playing left-handed has been changed, among other tweaks.