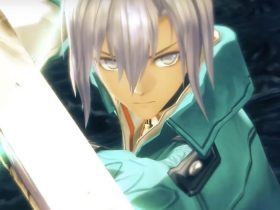 Save Astoria In Shining Resonance Refrain On Nintendo Switch

Mario, Sonic and pals put in an underwhelming competitive performance in Mario & Sonic at the Sochi 2014 Olympic Winter Games, their sporting prowess barely seeing them score a place on the podium. Now, after returning to train for a few more years, they have swapped Sochi’s snowy climbs for Rio de Janeiro’s sunnier shores in Mario & Sonic at the Rio 2016 Olympic Games.

That sees the Mushroom Kingdom and Mobius residents reignite old rivalries once more, participating in 17 events that will put their skill and finesse to the test. While the London 2012 Olympic Games may now be a distant memory, classic events that we once competed in make their return.

Players can participate in disciplines such as the 100m sprint, 4x100m Relay, 100m Freestyle Swimming, Equestrian, Javelin Throw, and Table Tennis, while new additions to the Rio 2016 Olympic Games come in events like Rugby Sevens, Football, Boxing, and BMX.

There are more than 30 playable characters to choose from, which is an impressive number even though some are locked to specific events. While, as expected, your Mii can take part in events and can use coins and rings to buy Mario and Sonic costumes to wear.

The 17 events that jostle for your attention certainly represent variety, but the shift to HD has still come at the risk of making us feel shortchanged. By comparison, London 2012 Olympic Games had more than 30 events – split between Olympic events and Dream Events – meaning that this Wii U iteration is lighter in terms of content alone. That there is less to wade your way through is a concern, especially when so many of the disciplines have already been transitioned to gameplay concepts in previous iterations.

It’s sad that SEGA still hasn’t realised the brilliance that was on display in their creatively promising Dream Events, but, in their absence, it is Duel Events that lend a Mario and Sonic twist on proceedings.

These task teams with building up Duel Points by tackling, spiking or shooting, which can then be banked to their score by scoring a try, point or goal. Such matches can soon excite, players choosing whether to daringly build up larger pools of Duel Points, or bank smaller amounts to steadily secure victory.

Players can power up with items such as Bullet Bills and Chaos Emeralds, or choose to unleash a Spiny Shell to momentarily take out the opposition. It is spectacular chaos and matches revel in the mayhem as Duel Points swing each side between victory and loss. That just three sports are remixed in this way comes as another undeniable shame, seeing as these are where Rio 2016 Olympic Games starts to shine.

That is all rounded off with the Heroes Showdown mode, which, while being labelled as a new addition, bears similarities to the Legends Showdown mode that was seen in Sochi 2014 Olympic Winter Games.

This sees players choose between Team Mario or Team Sonic, to then compete in random events against the other team in knockout rounds. After each, a character from the losing team is knocked out until either an entire team, Mario or Sonic has been eliminated. The last team standing will win, and this is a good if uninspired way to let players see everything that Rio 2016 Olympic Games has to offer. That it requires that players achieve a Gold in every single event or seven Bronze in tournaments seems excessive, and it would have been better if it was unlocked from the start.

amiibo support sees the Mario and Sonic amiibo let players enter the Mario and Sonic League tournaments respectively, while other amiibo reward you with coins or rings. It isn’t particularly remarkable in execution, but at least consideration has been made.

It may be all smiles on the beach that your Mii runs around, but Mario & Sonic at the Rio 2016 Olympic Games is a game that’s criticism falls on everything that it lacks. The joy of local multiplayer can still reward with hilarity, but the experience falls short in nearly every other area. The Mario & Sonic series still shows plenty of promise, but that is a momentary flicker here.