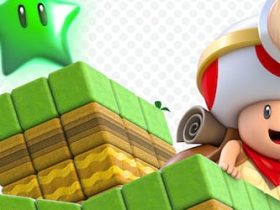 The Adventures of Captain Toad may make a solo return

We now know with a near degree of certainty that Nintendo NX will launch in 2016. Macronix today announced their financial results for the fourth quarter (ended 31st December 2015), which saw the company incur a $49.2 million loss.

Seeking to assure investors that they can recover, company president Chih-Yuan Lu extensively discussed their plans to lower production and reduce inventory level to increase their revenue growth. Which, he hopes, will see them return “to profit by the second half of this year.”

But, that recovery will be significantly aided by their contract to supply components for Nintendo NX. Taiwan’s Central News Agency reports that Lu confirmed that Nintendo will launch their as-yet-undisclosed machine this year, which is information that they would be privy to given their role to play in its production.

That has been corroborated by Taipei Times, who summarise Lu’s comments on the topic as: “…the company’s major client is developing a new platform for its video game device this year, which could provide a boost to the company’s business.”

Macronix are a leading integrated device manufactuer in the Non-Volatile Memory (NVM) market, and supply NOR Flash, NAND Flash and ROM products. They have worked with Nintendo across numerous console generations, including systems such as GameCube, Game Boy Advance, Nintendo DS, Wii, Nintendo 3DS and Wii U.