I do love it when a game takes elements from existing sports to form their own exciting and unique creation. Windjammers is one such example that took the relatively relaxing pastime of disc throwing (or Frisbee if you prefer) and turned it into a one on one adrenaline-fueled battle of reflexes and nerves. Lethal League Blaze – the sequel to the much loved Lethal League which itself evolved from a simple browser-based game – falls under that same hybrid category taking elements of baseball, dodgeball and blending it together in a very fighting game-like environment. It’s a unique type of “sport” to explain but one never short on excitement.

The aim of Lethal League Blaze is to take out your opponents by physically striking them with a ball. Players compete on a 2D stage (not too unlike a fighter) free to move and jump about with surprising flexibility. The ball can be angled when hit making things both unpredictable and difficult for your rivals to deal with. More importantly, the ball’s speed will increase with every successful hit – doubling should it be spiked downward. What starts off as a relatively gentler moving game quickly escalates into absolute chaos, the deadly projectile ricocheting about the screen so fast keeping up with it becomes nigh impossible.

Whether you choose to play as guy wielding a baseball bat, ping-pong paddles or even a crocodile with a robotic tale your basic movesets remain the same allowing you to double jump, swing, bunt (ideal for setting yourself up for a more accurate and deadly shot) and catch the ball. Each character also has a special move usable after four successful strikes of the ball. Their effects vary greatly from eating the ball and spitting it out at will to sending the ball through a portal in the wall and out the other side. They’re great fun to use mainly because of their ability to confuse and catch others off guard. 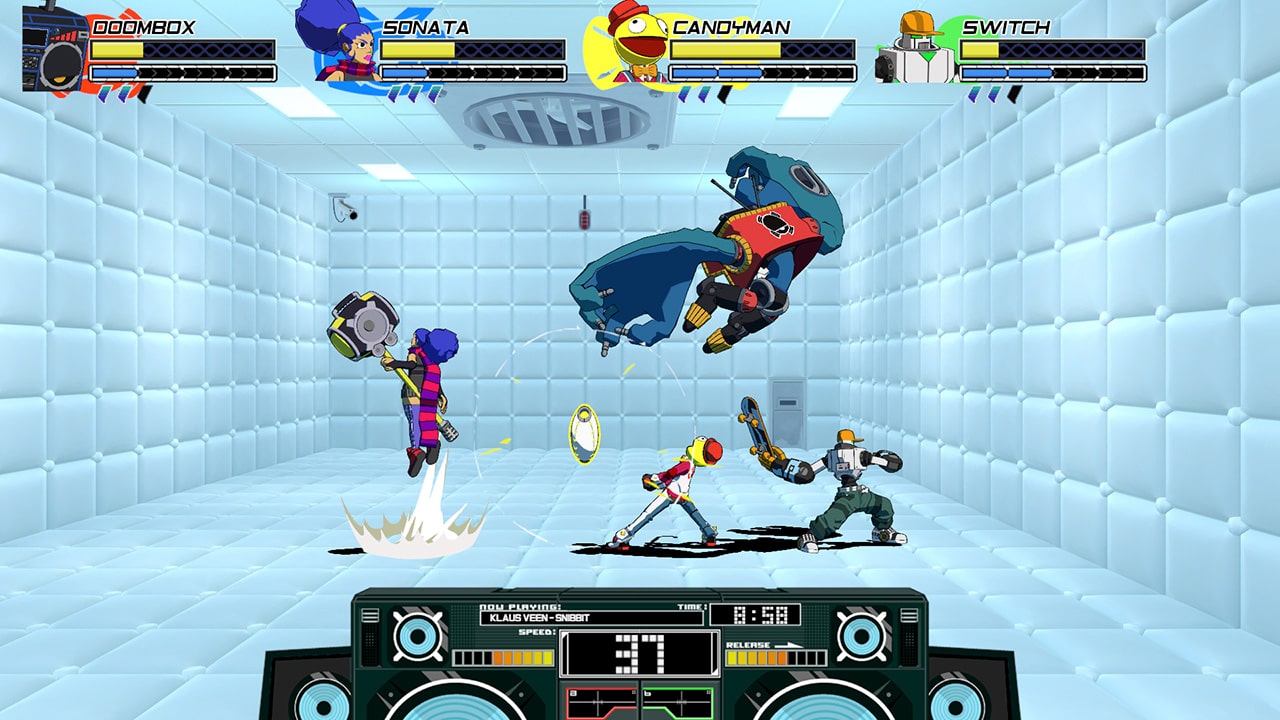 Lethal League Blaze brings with it some smart additions over the original game. For starters, players are now able to catch and throw the ball, a simple move but one that offers another way to puzzle and trip up your opponent. Each player now also has their own health bar, allowing them to take several hits from a slower moving ball before being eliminated. This results in longer rallies and more chances for the ball to reach exciting heart-stopping speeds. No longer will you find yourself falling victim to a ball moving at snail-pace right out the gate. Of course, health bars can be switched off should you prefer to play the original way.

Players can now throw even more chaos into the mix with Mario Kart-style power-ups that include everything from a remote-controlled ball to giving it an instant speed boost. They’re an exciting and unpredictable inclusion but one that’s used sparingly enough throughout matches without feeling dominating.

The game’s presentation has also seen a boost both visually and in terms of polish since the original. Environments offer a better level of depth thanks to the new 3D art style while little details in the backgrounds such as civilians wondering the streets or workers digging on a construction site help make levels feel more dynamic. The soundtrack once again is another highlight this time featuring music from Hideki Naganuma of Jet Set Radio fame.

As a fan of the first game, it’s great to see the sequel upgraded pretty much across the board, from the gameplay to the visuals to just the overall vibe. Even seemingly small embellishments like having the action freeze and the camera focus and swoop around a character when they receive a final blow adds just that extra layer of style and coolness the game so successfully basks in. 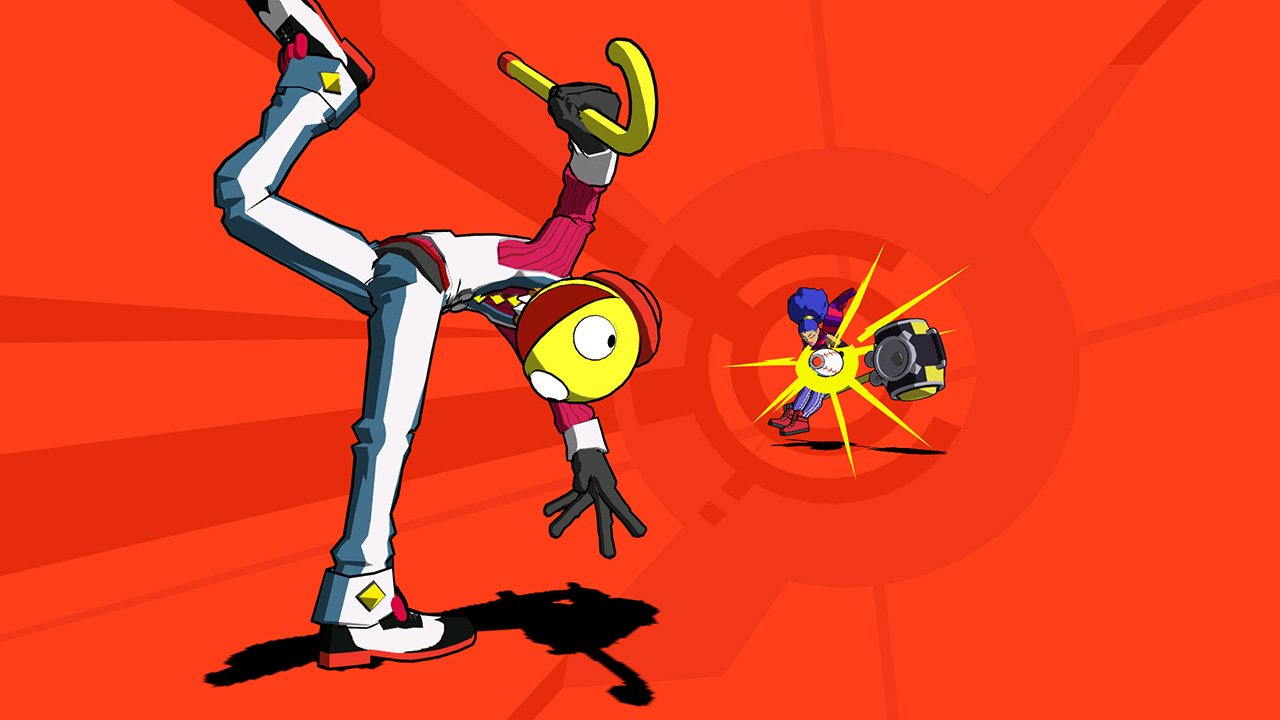 The game does its best to offer something for the single-player including a story mode, one whose narrative tries to develop its futuristic world, the illegal anti-gravity ball-based sport and its goofy characters. Much like fighting games before it, story mode amounts to little more than a series of one-on-one battles with sprinklings of plot slotted between. It’s short and rather forgettable much like the game’s arcade mode which again focuses on two-player battles one after the other in quick succession. It’s the overall lack of variety that ultimately hurts the single-player options most – particularly the arcade mode – the game neglecting its varying match types and the inclusion of more than two combatants.

Unsurprisingly multiplayer is where the game truly shines offering plenty of match types and options to tweak to your pleasing. Whether playing with two, three or four players the experience is nothing short of exhilarating. Sure some may find four players battling it out on a single screen chaotic, but it’s the fun kind. The sort we’ve come to love from series such as Super Smash Bros. All this action going on doesn’t impact the performance when running in docked mode however handheld does see the frame rate reduced to thirty frames a second. Disappointing but to be perfectly honest this game is best played with a group around a big screen.

The number of unlockables within the game feels generous offering everything from color swaps and new outfits to game modes and music tracks. With currency used to unlock these extras earned through playing pretty much any mode in the game, you always feel like you’re being rewarded for your time. The rate at which you earn credits can feel a tad on the slower side but given how easy it is to lose hours at a time to the game’s multiplayer you’ll accumulate a decent fortune without even realizing.

Put simply Lethal League Blaze is one of the best multiplayer experiences I’ve had on the Nintendo Switch. Just sit a group around the television and watch the hours quickly melt away, the game’s chaotic action never failing to drop jaws and get its players on the edge of their seats. Fighting with your fists is entertaining sure but smashing your opponent with a ball moving at the speed of sound is even better.