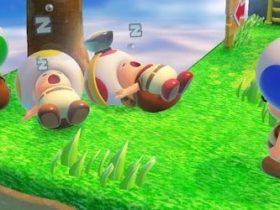 If smacking enemies with your spell book and summoning cuboids to crush them sounds appealing, then Hyrule Warriors has you covered.

Blue-haired magic caster Lana is a new character being introduced in Koei Tecmo’s Wii U exclusive, fighting alongside characters from The Legend of Zelda that are currently known to include Link, Zelda, Impa, Midna and Agitha.

Hyrule Warriors will release exclusively for Wii U across Europe on September 19th, and North America on September 26th.