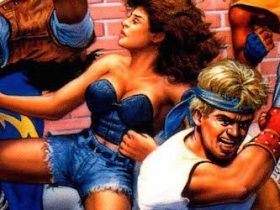 Triple Deluxe saw Japanese consumers eagerly snap up 214,208 copies, besting opening week figures for the past three titles in the series that had graced the Wii and DS. For comparison, Kirby’s Epic Yarn shifted 92,280 copies in its first week in Japan, Kirby: Mass Attack saw sales of 74,915 copies, whereas Kirby’s Return to Dreamland achieved 136,811 copies.

The chart overall continues to be dominated by the 3DS, with Puzzle & Dragons Z, Pokémon X and Y, The Legend of Zelda: A Link Between Worlds, Monster Hunter IV, Youkai Watch and Sentouchuu: Survival Battle with the Legendary Ninjas, all ensuring that the handheld was well represented within the top 10.

If there was anything to be downbeat about it would be the sudden drop in Wii U sales, which fell to 14,020 units sold for the week. Although the 3DS and 3DS XL continue to succeed at retail, achieving combined sales of 60,154 units.