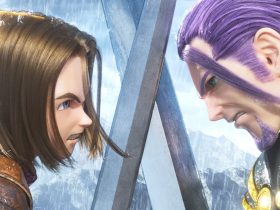 Build, expand, defend. Your objective in Kingdom: New Lands is concise, even if it isn’t particularly clear right from the outset. For actions speak louder than words, and, after timidly following a ghostly apparition that leads you to where you will start to build your kingdom, developers Noio and Licorice choose to leave the player to their own curiosity.

As a monarch, whether that be a king or queen, you have sailed to faraway isles where tales have spread that there are mysteries waiting to be discovered. After setting up a base camp from which you will start to build your kingdom, it is important to take time to explore your surroundings.

With your ruler permanently on horseback, that will see you gallop back and forth across the 2D environment. It presents a chance to mentally place any wanderer camps, the merchant’s home where he rests with his donkey, chests that will reward you with coins, plains where horses graze, shrines that can temporarily power up your people, and the shipwreck – which the player will need to rebuild so that they can sail to a new land. 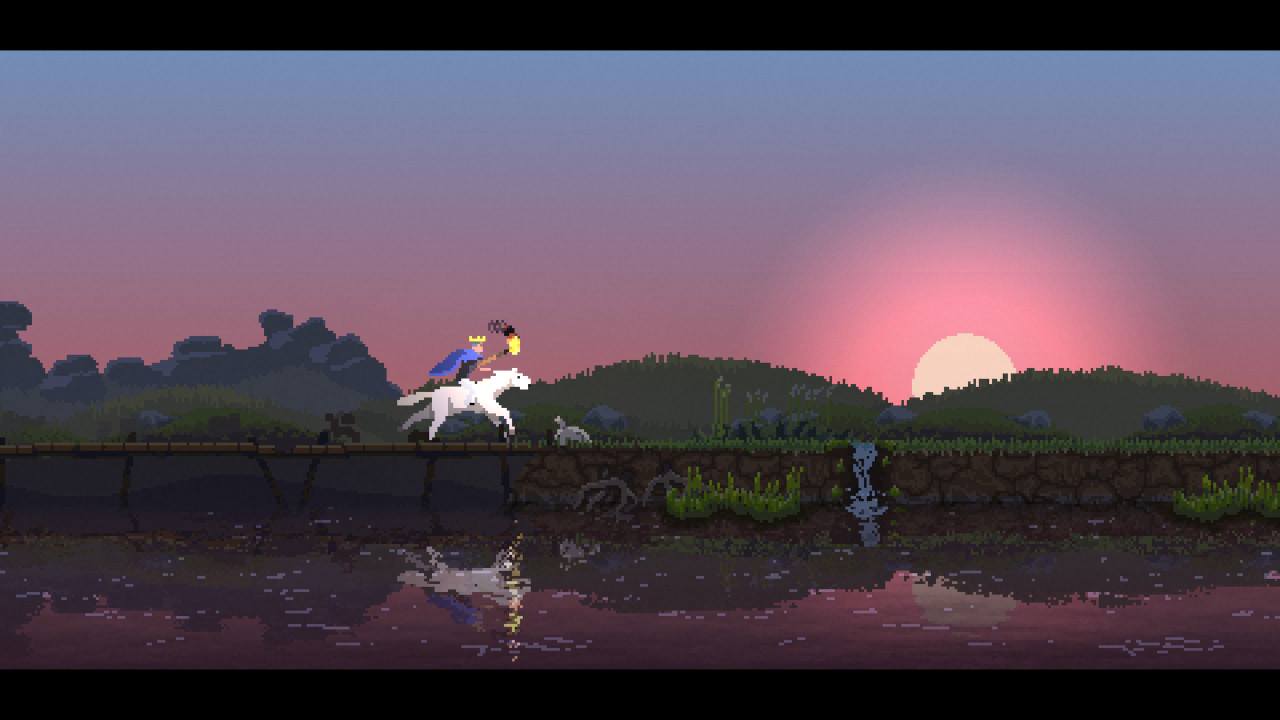 It is the portals that are most important to remember, whether that be the smaller ones placed in the darkened forests or the larger one buried into a cliffside. With a day-night cycle and even seasons soon coming into play, the player’s progress is under constant threat from the Greed. These goblin-like creatures only come out at night and are hell-bent on destroying your kingdom, robbing you of any coins that they can, and ultimately wanting to steal your crown. No crown. No king. And, if they are successful, the player will be met with the game over screen.

This is where your hard work comes in, and where a simplicity in approach soon sees Kingdom: New Lands thrive. The coins that you gather relate to the single action that your ruler can directly make – throwing or spending coins. It’s minimalist but distils what could soon become an overwhelmingly complex game into a more accessible one that wholly revolves around a single interaction.

Hurling a coin at a wandered will see them walk back to your camp, where you can spend more coins in order to make them an archer, worker, or, eventually, a farmer or knight. Archers will hunt for nearby wildlife to earn you some coin and protect your kingdom from the Greed at night, while workers will build as you command and even have the chance to pelter the Greed with catapults later on. Farmers can tend to the land as another income source, and knights will rally archers to their side for you to send them on a quest to destroy portals. 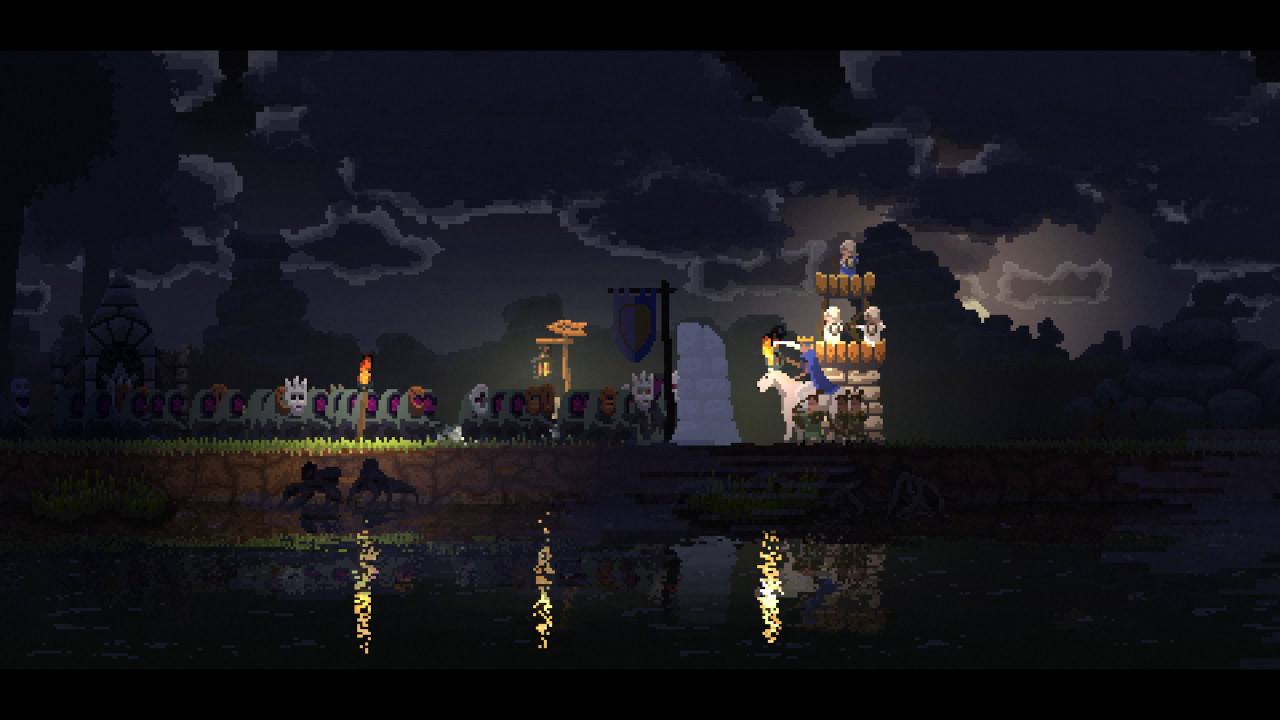 Your loyal subjects can be attacked, and if struck by the Greed they will revert back to wanderers – requiring that you spend more coins to recruit them and allocate a role once again. It’s important to manage your defences, then. That will see you build walls, towers from which your archers can darken the skies with arrows, catapults as mentioned earlier, and steadily improving your castle – that starts out as a simple campfire.

Another shrine will let you move on from the wood era, presenting the chance to use stone. This sturdier material will let you upgrade your defences even further, but, with this comes at an ever-increasing cost, meaning that part of your battle in Kingdom: New Lands is managing your coffers. If you find that your pouch is constantly empty, you know that you will be in for a hard time.

There are so many variables at play, not least that new elements can be introduced to each land once you recover a map. But, your main objective is to reconstruct the ship and set sail for the next land. With the Greed’s constant threat, this is a particularly time-consuming task, especially in that it is the most expensive task that you can throw coins at. 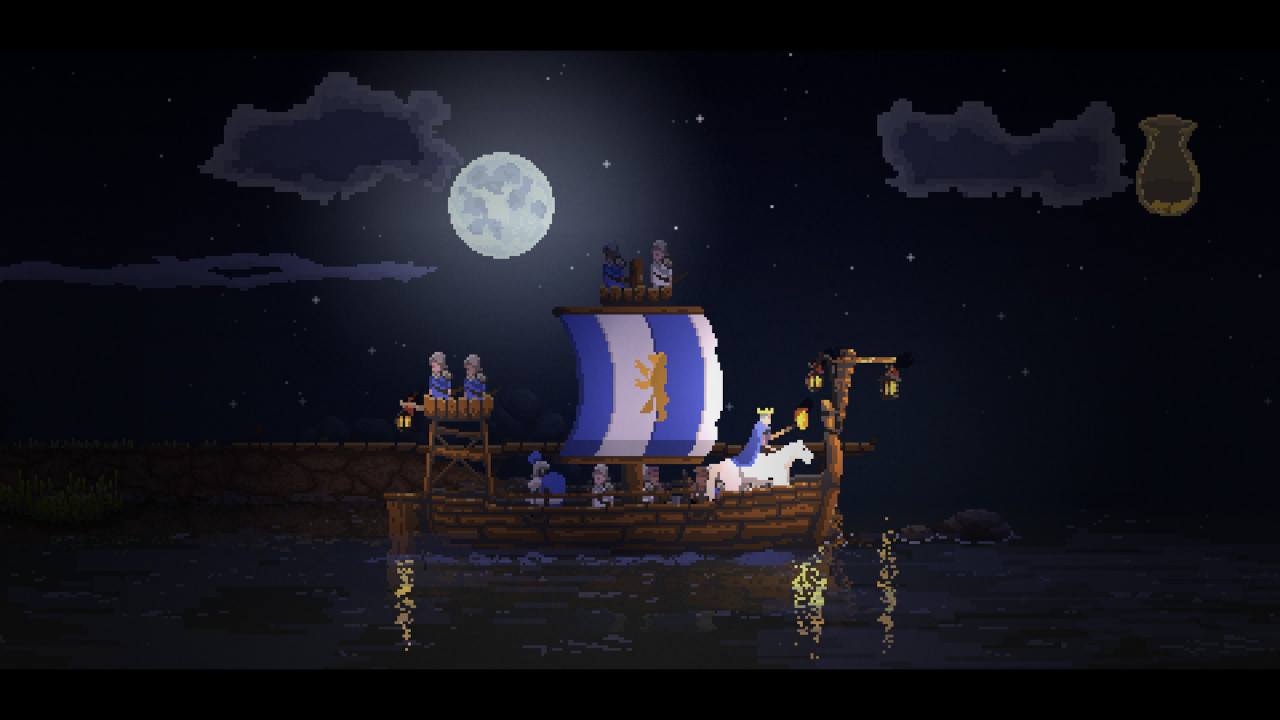 The experience continues to be uplifted by a wondrous pixel art that never loses its charm. The sun rises and sets in order to help you keep track of time, although weather conditions can make this a challenge with rain, storms, and clouds sometimes obscuring the giant ball of fire from view. That the soundtrack that ToyTree has penned so readily captures the picturesque landscape only adds to the experience, making it such an inviting world to become a part of.

Kingdom: New Lands easily ranks among my favourite games on the Nintendo eShop for Nintendo Switch at this point in time, but that isn’t to say that it is free from blemishes. The most problematic is that, if you stay on an island for any great length of time and recruit countless to your side, that, coupled with the increasing number of Greed that attacks you, will soon see the frame rate take a nose dive. There is an update in the works, apparently, but know that hasn’t been resolved just yet.

It’s an incredible sense of discovery that soon sees Kingdom: New Lands become such a remarkable experience. It can be confusing at first, for sure. But, as you start to piece together all the systems that are at play, this standout addition to the Nintendo eShop soon becomes fiercely compelling to the point that you can happily sink countless hours into it at a time. Just keep an eye out for Greed.