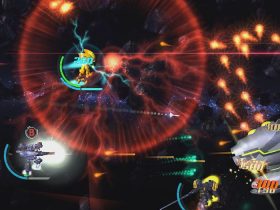 Save The Future In Stardust Galaxy Warriors: Stellar Climax On Nintendo Switch

Asterion Games and Talerock have confirmed a release date for Grimshade on Nintendo Switch.

This party-based role-playing game has taken inspiration from ’90s JRPG classics, and challenges you to lead a company of heroes whose fate becomes tied with the world of Ree’fah.

The King and his loyal Champions have vanished. Monsters have breached the high walls that surround Brann and the neighbouring kingdom has looked to capitalise on the chaos, sending an army that has now appeared at the outskirts of the city.

In this grim story of war and personal choices, you will have the chance to explore the hand-painted fantasy world to uncover its secrets.

You will face your enemies in turn-based battles, choosing your squad wisely and considering their positioning to ensure that you can topple even the most powerful foes that you will be confronted with.

Each of your characters has a role to play, with each piece of armour, weapon or accessory that you can equip unlocking a unique skill for each particular hero.

Grimshade will release on the Nintendo eShop for Nintendo Switch worldwide on 25th June 2020.