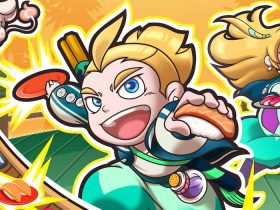 Space Mace and Graffiti Games have announced that Joggernauts will release on Nintendo Switch, a chaotic colour-coded auto-runner party game.

Players take turns leading a jogging team of alien athletes as they brave deceptively difficult colour-coded platforming levels while trying their best to avoid smacking straight into the obstacles that litter their path.

While much of the experience has been geared around jogging cooperatively with up to four players, you can choose to jog solo in a separate single-player mode where one player must control two characters that have different colours.

Teamwork is required to succeed, as, while jogging, players must switch the character at the front of the line to match the colour of the enemies, obstacles, prizes and pickups that they come across in every level. Mistakes reduce the team’s shared number of lives, and players will always succeed or fail as a group.

“Single player mode is a bit like patting your head while rubbing your belly because players will need to keep track of jumping and switching for two characters, which is loads of fun and most folks get the hang of it after a couple levels,” explains Space Mace co-founder Zachary Johnson.

Joggernauts will release on the Nintendo eShop for Nintendo Switch worldwide this summer.