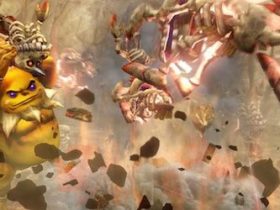 How to unlock Darunia in Hyrule Warriors

THQ have confirmed that BAFTA award-winning composer Jesper Kyd is to provide the original score for Darksiders II.

Kyd, who hails from Denmark and has previously provided iconic scores for the Assassin’s Creed and Hitman series, has composed emotionally charged music that will serve to enrich the player’s cinematic journey through the realms of Vigil Games’ anticipated sequel.

“Darksiders II is an awesome game and one of the most fun and creatively satisfying projects I have scored. I had a blast working with the team at Vigil”, Jesper Kyd commented.

“It’s been an absolute pleasure working with Jesper”, adds Jeremy Robins, Audio Director at Vigil Games. “He’s an extremely talented composer and an avid gamer, who not only created an amazing soundtrack for Darksiders II , but intuitively knew how to cater each composition to achieve maximum musical impact for players”.

Alongside this, Giles Lamb has composed the creative score for the Darksiders II advertising campaign, having previously written music for films, commercials and games in the past. He recently won a Golden Lion at Cannes 2011 for the score written for the Dead Island trailer.

“The emotion that Giles brings to the marketing creative with his unique score is unparalleled”, explains Jim Huntley, Vice President of Global Brand Marketing. “He immediately sets an unforgettable tone & theme for how we’re portraying Darksiders II ’s protagonist, Death”.