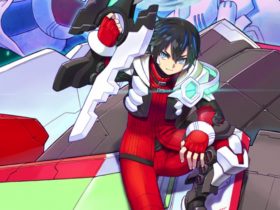 After waking up to find that her father, brother and household pet have been brutally murdered, Itta’s bizarre lack of emotion during her traumatic discovery is met by an astral guardian who adopts the form of an adorable little feline. The whiskered lost soul hands over a spirit weapon in the form of a revolver to the ill-fated babushka doll-like presence of the young girl. This is but a starter tool to overcome the formidable 18 deadly encounters that await her in a purgatory land that embraces a tone of discomfort and dread from beginning to end.

The inspiration behind Glass Revolver’s debut title ITTA is the result of sole developer Jacob Williams struggling with the darkest moments of his own mental health. It’s something he has been very open about during interviews, to where he states the idea of this surrealism horror-based twin-stick shooter was actually conjured up during his time recovering in a psychiatric ward. While such unfortunate situations certainly carry a heavy burden, the idea of channelling that same negative energy to paint an abstract picture for others to experience can often result in very interesting and unique ways to tell a story.

The overworld that Itta curiously wanders around in is often bleak and desolate yet beautifully worn-in. This is cast further by both an excellent if not haunting soundtrack and a handful of local residents with odd characteristics that find it difficult to understand the purpose of their own existence. I often felt vibes of Jim Henson’s Labyrinth, Lewis Carol’s Alice in Wonderland and Studio Ghibli’s Spirited Away of a girl contained within a dream-like foreign garden with a dark motive to entrap her forever. However, ITTA is essentially a boss rush, bullet-hell shooter wrapped up in a cloth of exploratory psychological horror – a combination that happens to be rare to find when considering the quick-sink arcade roots that the twin-stick shooter genre usually abides by.

While the overworld bears no physical threat towards Itta, the guardians sealed away behind locked chambers certainly do. Some of the damned are often once loved, now reliving traumatic events that would eventually swallow them up forever. Yet it’s down to Itta’s search for sanity that sees her silencing the madness of a mourned wife gracefully dancing around firing off two handguns, or a shadow of a mysterious boy that dives towards the screen with animated finesse only to plummet into the ground releasing a deadly shockwave of bullets.

During the confrontation, Itta’s only form of defence is to roll under the chaos of splitting bullets and kaleidoscopic patterns. Each boss generally has three waves to deal with before receiving that final slug to lay them to rest. Fights can sometimes be tense but often exhausting. And while there are some genuinely interesting and well-crafted character designs to go up against, their presence can tend to often be forgotten due to how early the gameplay peaks in difficulty, and how eventually the repetition smothers its structure.

As much as I adored the idea of ITTA, I found it incredibly hard to actually enjoy it. For me, the difficulty hit its peak early at the third boss for all the wrong reasons and anything that came after usually felt more like an endurance test rather than an engrossing challenge. The boss in reference was a King with an oversized dadao cleaver that would begin to teleport directly to where Itta would be. The problem wasn’t the enemy attack itself, but rather how I felt the need to blindly guess my timing rather than study, learn or react to it.

The incredibly brief telltale signs with no audio cues doesn’t help, especially within the distraction of waving blanket of bullets filling the screen. His attack would often land on target despite still being clearly visible from the origin point of where he teleported from. While that particular boss gave me the most trouble during my time with ITTA, it was also the one I remember most. Unfortunately, because I felt I had to depend on luck when facing him, it never really seemed like an accomplishment to finally beat him.

As for the other bosses, the same rinse and repeat strategy of circling, dodging and shooting across long-winded fights would usually do the trick. Add in a certain powerful symbiotic parasite and generous increase in health as a reward for scouting every nook and cranny, progress suddenly became easier to smash through the experience. It may very well be Titan Souls that ITTA clearly draws its inspiration. But where the game truly needs to take notes from something created with a similar ilk would be Furi. Each fight in that particular game felt like a code to crack and made each and every encounter memorable as a result. ITTA felt more like a chore during its rather short time to reach its end with issues that, on the whole, far outweighed its potential.

There is a carousel of weapons to collect in ITTA that can provide a slightly different tactical experience depending on which one you decide to go with. The problem is, the weapons I personally found along the way never seemed nearly as effective as the shotgun. It happened to be the second weapon I collected and one I really didn’t enjoy using at that. Furthermore, any weapon I finally obtained that did appear to have satisfying potential would be after already murdering every boss in the game.

This leads to even more gripes as the game throws you back into the world post-credits to tie up any loose ends. I ended up blindly wandering around the overworld for what seemed even longer than my original playthrough, adamant that there would be at least one more encounter to face and maybe even a separate ending to witness.

Given that I was led to believe there would be due to how the now resealed final boss lair had an active red skull marker to suggest so on the map,  I eventually reached out to Glass Revolver to finally seek advice on how to enter the gate only to be informed that it wasn’t possible. I felt like after all that time I was wandering around purgatory myself looking for a cause that just wasn’t there. All I had left to do was find cat statues in a barren landscape that would transform the presence of my allied spirit feline, and bomb random walls collecting new weapons which were now evidently useless.

Being a game critic often has its advantages, but it is certainly a hard pill to swallow knowing that you’re about to pull the rug from under all the hard work that the developer has clearly committed themselves to. I respect anyone who has the sole dedication and skill to independently build a project such as this one. In comparison, it’s in situations like this where I feel I have no place to judge the efforts of others. I genuinely hope ITTA will be enjoyed by many but it’s only fair that I provide my wholehearted insight to the game laid before me. I loved how unsettled the world of ITTA made me feel, the wonderful Hyper Light Drifter-style visuals and incredibly fitting soundtrack. I just wish I felt the same way about the actual meat of the gameplay itself.