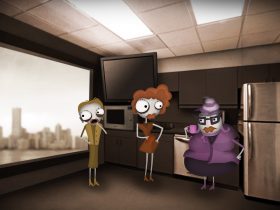 Mankind discovered that it wasn’t alone in the galaxy when, IronFall Invasion foretells on 14th May 2015 at 5.32pm, a small observatory in southern Italy detected radio signals coming from the Omega Nebula. Everything fell silent until 16th October 2017 at 8.16am, when several objects travelling at a significant speed were located within the Solar System.

Earth became ridden with fear, an alien civilisation known as the Dyxides soon invading the planet and overrunning military forces within the space of just five weeks. Out of such darkened times, a resistance movement named IronFall emerged – referring to the day of the extraterrestrial attack – a global alliance whose factions work independently from one another to weaken and exhaust Earth’s new occupants through unrelenting guerrilla tactics.

That sets up the Campaign in IronFall Invasion nicely, even if you have to rely on the game’s manual to reveal such an intricate backstory. As Illinois born Jim Woper, an ex-US Marine Corps lieutenant who is losing hope that humans will ever win the war, and Samantha Finch, an ex-NYPD detective from New York City, you will undertake strategic strikes around the world to undermine the Dyxide presence. 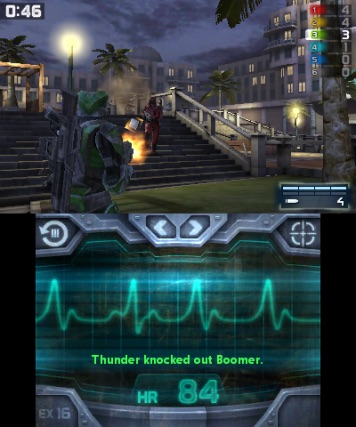 It’s hard not to shake Gears of War from your mind when witnessing VD-Dev’s take on the third-person action genre. The enemies may have invaded from the skies rather than by burrowing to the surface, but Woper’s bulky EX16 exoskeleton armour, the cover-orientated gameplay and a mechanic reminiscent of Active Reload all warily tread an experience that in parts feels dangerously familiar.

Beginning with a standard issue, semi-automatic pistol and assault rifle, the ploy in IronFall Invasion is to steadily expand your weaponry as the Campaign progresses. Disappointingly these rarely thrill, sticking to what is known – shotgun, sniper rifle, grenade and rocket launcher – rather than diversifying away to equip you with a unique arsenal plucked from the mechanical remains of your oppressors. It is only the Dyxide botgun that does so, easily one of the game’s best weapons that sprays advancing enemies with a three-way burst shot. More like this, please.

If I bemoan my own lack of enthusiasm for their mid-game discovery, it becomes far more jarring against the diabolically lacklustre voice cast. VD-Dev isn’t aiming to set the world alight with emotive storytelling as seen in recent years with The Last of Us, but those that they enlisted to record the dialogue in IronFall Invasion fail to conjure any drama, spark or energy behind the lines that they flatly mutter. 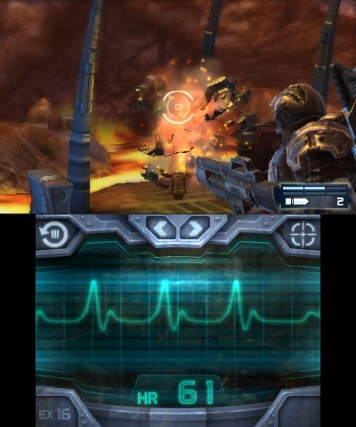 The interplay between Woper and Finch is similarly worrisome, a welcome shift in perspective that is regrettably panic-inducing. Whereas Woper is armed to the teeth, Finch is left to fend for herself with merely a semi-automatic pistol. These sections were perhaps meant to be more challenging for the player, but result in frustration when you’re unequipped to deal with overwhelming odds. That these are mostly at night, and with only a torch to light your way, only worsen the scenarios.

Where IronFall Invasion succeeds is in visual flair. This is easily one of the best-looking games to have graced the Nintendo eShop, meticulously crafted environments taking you from a laboratory’s confined corridors to rocky climbs, the skies over a nuclear power plant, or averting a dam’s destruction.

VD-Dev has notably interworked the Nintendo 3DS touch screen, readily tracking your heart rate which is used to depict your current health. Dashing and taking damage will increase it to the point where your vision will blur while taking cover and keeping out of harm’s way will allow it to return to a steady BPM. There’s also quick access to icons for reloading, switching weapons and taking cover. Those with a New Nintendo 3DS can use the C-Stick to aim the crosshair, which, for me at least, wasn’t sensitive enough even on the highest setting, while those without will have to rely on Stylus input which is similarly not as free in movement as necessary. 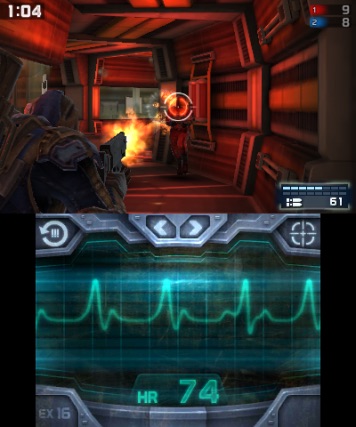 The touchscreen continues to enter its own in IronFall Invasion‘s puzzle elements. While objectives are largely unremarkable in mainly seeing you wiping Dyxide room-by-room, these instead see you match wires to points on a circuit, neutralise pathogens by identifying their weak spot and then aligning their molecular structure or match designated radio frequencies to unlock doors.

Aside from the Campaign, IronFall Invasion serves up a separate Multiplayer portion that will continue to keep you occupied beyond completion. This sees up to six players take each other on in matches through either online or local connection, choosing whether to place bets to claim the jackpot if they or their team win. Not placing bets will instead see the winner rewarded with a bonus, the credits that you earn spurring your success.

There’s commendably minimal latency when taking the fight online, although it’s necessary for the game’s community to grow over the coming weeks. Maps carefully rework the campaign environments into smaller arenas, although, without a map or radar designating where your opponents are, you’ll be relying on catching any movement in your surroundings to begin the hunt. 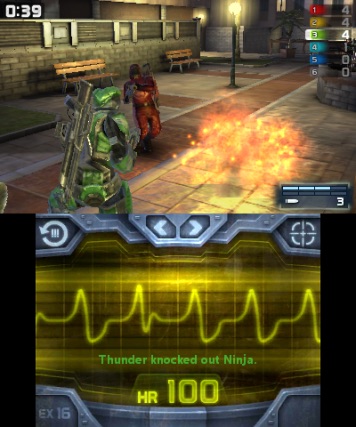 Survivor Mode, another addition here, will allow you to practise against waves of Dyxides, a bot-based mode that challenges you to defeat as many as you can before time expires. This works well, and the continual threat headed toward you will have your adrenaline pumping far more quickly than the main game.

It is perhaps the pricing strategy for IronFall Invasion that hurts it most, the entire package setting you back £17.98 (€19.98) or being purchased as separate components for £8.99 (€9.99). There’s lofty ambition to admire, but it’s a remarkably high entry point for a largely forgettable Campaign that never jostles enough for your attention and Multiplayer that won’t command your commitment long enough.

I can respect VD-Dev for looking to exploit a largely unpopulated niche on Nintendo 3DS in IronFall Invasion, but unfortunately, it doesn’t successfully strike its mark as intended.