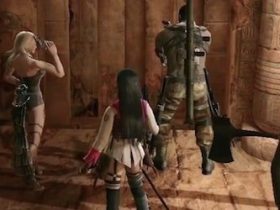 In taking down his foes, Iron Man will rely on his Repulsor Blossom Attack, Unibeam, Super Strength, Missile Barrage and power of Flight, while the Black Widow can employ use of the Widow’s Sting, Double Trouble, Widow’s Veil and Jumping Spider.