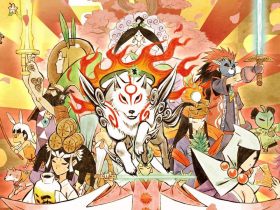 An alien race known as the Nyagu have granted humans with the ability to self-obtain electricity in order to solve a global energy crisis. However, enterprises soon find a way to enslave the less fortunate by rounding them up like cattle and use them up like Duracell energy bunnies. Our hero of the story, Iro happens to contain an extra special gift of changing the polarity of his inner energy. This unique ability becomes particularly useful to him as he sets out to avenge the death of his mother and save mankind with his little colour-swapping spaceship.

Iro Hero takes obvious influence from the classic arcade shooter Ikaruga in how you use a polarity system to navigate and blast your way through nine vertical scrolling stages. However, its simple pixelated graphics, slower pacing and enemy formation somewhat more reflect those of 70s-80s coin-ops than it does the high octane Japanese bullet hell shoot ’em up. While it does implement a cognizant approach to what lies ahead of you, the speed of the scrolling camera can tend to make the levels themselves last much longer as a result. This as an approach could work well in its favour if it wasn’t so God damn unforgiving. 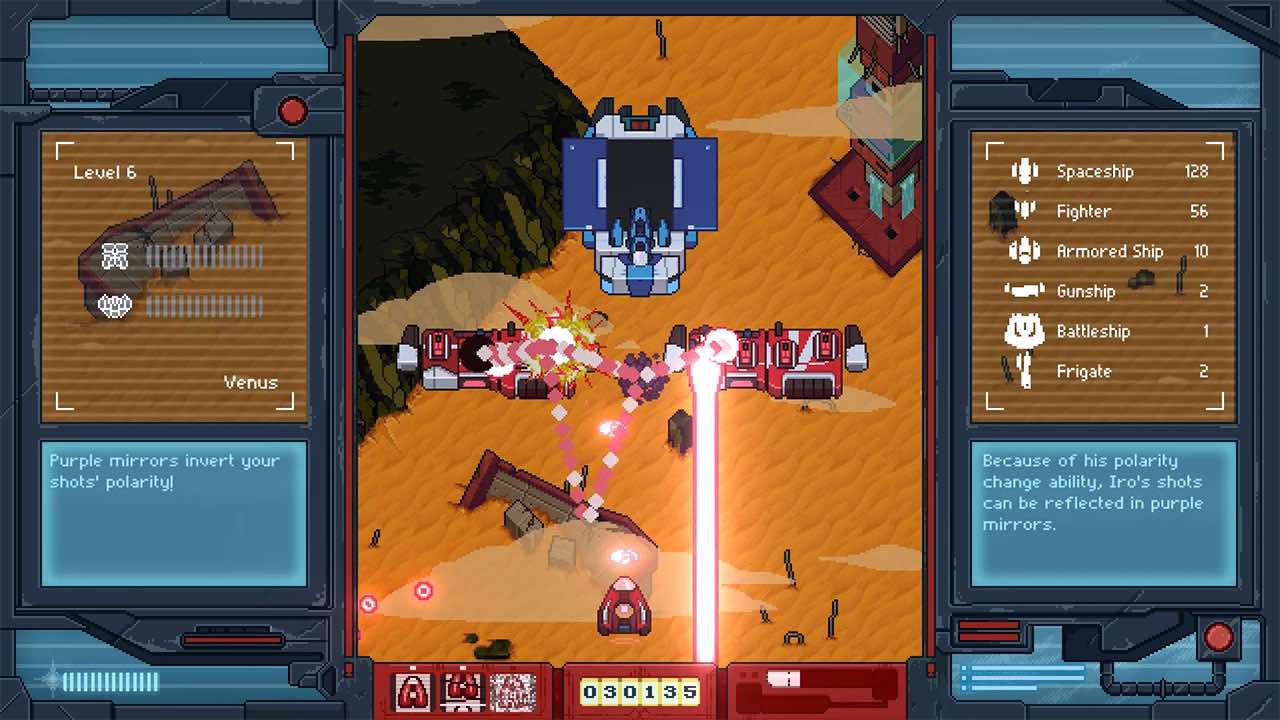 Despite Iro Hero’s basked floaty movement, dodging bullets and gaining space is still manageable enough to work with. It’s more the lack of a continue or checkpointing system that makes the experience incredibly intimidating. You have a maximum of three lives to work with and the only way to gain any back is to buy them with your score at the end of each level. Because the levels do move at such a slow pace, it makes replaying the first few very tedious as a result. What generally makes an arcade shooter contain that morish hook is in how balanced the stages are. This also includes the length of the stage to which, again, something like Ikaruga does so well. Even though that particular game is incredibly challenging, it also gives you the tools to want to learn its layout with an almost unlimited scoring potential. With Iro Hero, you don’t have any option other than to start right back from the very beginning without negotiation.

This may very well suit hardcore purists who play games like it’s 1989, but I could imagine most gamers in this day and age won’t have the time nor the patience to rally through the repetition. There aren’t many moments in the early stages where you can upgrade your gun either, and even when you do the power-up is usually located in a place where you must recklessly risk a life to do so. I wouldn’t mind, but the extra firepower doesn’t really do much more than slightly widen your trajectory making the risk even less worth the effort. Well, at least not until you’re good enough to actually gain any multiple upgrades, at least.

You can power up a more damaging attack by collecting enemy bullets of the same polarity, although you cannot kill enemies that share the same colour. It doesn’t look great when you let your power loose either, but having some sort of extra attack does at least work well enough to be useful. There are some decent qualities to the level layout that do implement some clever little features like shooting a coloured bumper that will bend your bullet into a right angle, or altering a bullet colour altogether with the aid of environmental energy walls. It’s just a shame that the game doesn’t want the average player to see its full potential. 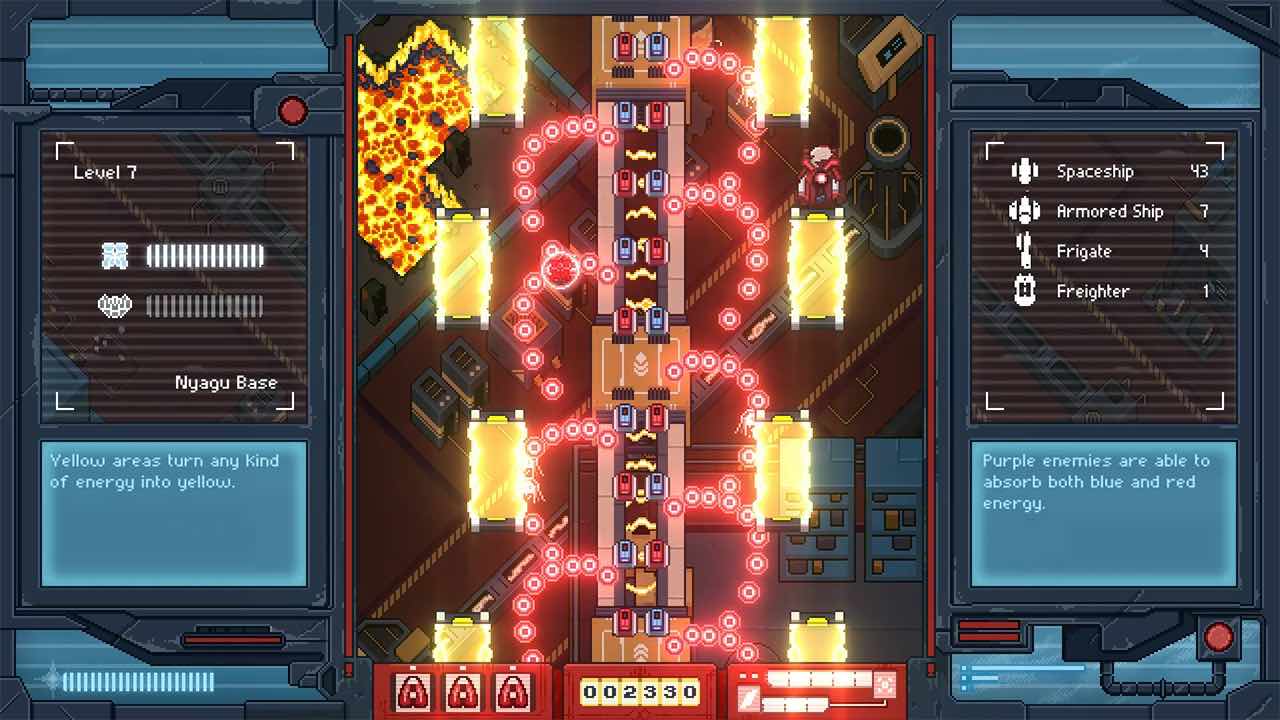 On a visual standpoint, Iro Hero both works and falls a little flat in presentation. The backgrounds are nice but the ships and the artwork that accompany them leaves a little more to be desired. I do get what they were going for, it just runs slightly short of looking as interesting or as exciting as it could have been. The background music, on the other hand, is very good, with tracks that are catchy and work very well for the genre. What I did have a problem with though was how the conversations that compliment the story are carried out at the sides of the screen when your eyes are heavily fixed on the action. Without any voiceover, you’re not really going to be able to keep up unless you pause the game to read what’s going on. This turns out, as you would imagine, to be very inconvenient indeed.

Iro Hero is a decent enough shooter that doesn’t want you to see how good it could be. The lack of continues or any aid in progression will leave newcomers to the genre feeling cold enough to probably put them off altogether. Unless you really want to put a great deal of effort into memorising levels that seem to take forever to complete, the chances are that you will quickly bore at the thought and disregard the idea completely. What I will say is that if a software update does drop to make Iro Hero a bit more approachable, it does play well and control tight enough to be a decent arcade blaster. As for now, honestly, you’re much better off with Ikaruga or Danmaku 3 Unlimited if you haven’t got them already. While they won’t hold your hand – far from it in fact, they will at least provide you with the convenient necessities to give you the incentive to learn.